Dying Light 2 is all about making choices. Sometimes, these can have major ramifications on the rest of the game, changing your relationships with other characters and factions. And sometimes, they don’t really have that big of an impact, essentially resulting in just a few different sentences from other characters. The “Getting Stronger” choice is the first real choice that you will need to make in DL2. You can either tell Hakon the truth, in the “From a GRE scientist.” reply, or deflect the question with the “Better for you not to know.” response. But which choice will lead to a better outcome for you? And what are the consequences of both of these choices? In this Dying Light 2 Getting Stronger Choice Tell Hakon That Gre Key is From a Scientist or Better for Him Not To Know guide, we will cover each of these. 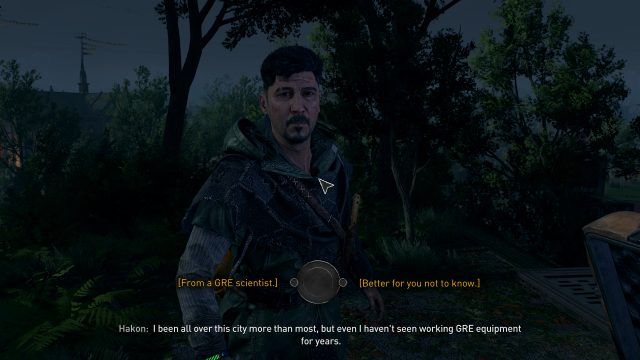 If you choose to tell Hakon the truth, Aiden will explain how he came into the possession of a GRE key. Hakon will be happy that you have chosen to share this information with him. Select this if you want to role-play a character that is honest and forthcoming.

If you choose the “Better for you not to know.” dialogue option, Hakon won’t be too disappointed that you haven’t told him everything you know. You can select this if you are playing Aiden as someone who is careful of what he says to people he doesn’t yet know very well.

What is the Better Choice in Getting Stronger DL2?

Both of these choices will be referenced later on in the game. Hakon is one of the key characters in the game, so you should keep that in mind whenever you are talking and dealing with him. The title of the game, Stay Human, is also its central theme, so pay close attention to what sort of Aiden you are role-playing, because his decisions will impact the people, events, and factions around him.

PREVIOUS POSTDying Light 2 Save Game Location & How to Manually Save