The “Pilgrim’s Path” is the first quest in Dying Light 2. As such, it functions not just as an introduction to the story and word of DL2, but also as a tutorial. Unfortunately, many players have been getting a particularly vicious bug during this quest. This bug prevents them from turning on the power in the building and thus progressing the game. Is there a way to fix this bug? As we will see in our Turn On the Power in the Building Dying Light 2 Pilgrim’s Path Bug Solution guide, there is something you can do to resolve this issue if you get it. 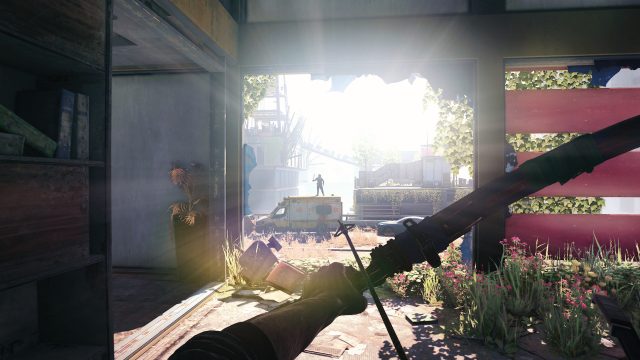 As we mentioned, this occurs at the very beginning of the game. After Aiden gets to the Radio Antenna, he will then need to search for a safe place to sleep. Once he is done searching the building, he will come to the conclusion that he needs to start up the generator and turn on the power there so he can be safe. The generator is in a shed outside. As Aiden begins to open it, he will be attacked by several Infected, including a special red one that can jump and perform Power Attacks. Aiden needs to clear out the area from Infected before he can proceed. As long as the jumping Infected isn’t killed, the other Infected will keep respawning, so make killing it your priority.

Once all the Infected are (permanently) dead, finish opening the railing and turn on the generator inside. And this is where the problem occurs. Many players cannot get the generator to turn on. While this will almost certainly get patched soon, what you can do for now is to kill off your character (you can jump off a cliff nearby) to get him to respawn. The generator should work as intended then. If it doesn’t, try restarting the game and repeating the process.