Cold Case is one of the side quests in Fallout 76. In it, you’ll have to look for a missing boy on behalf of Annie the robot nanny. She’ll send you from place to place to investigate the circumstances of the boy’s disappearance, and at some point you may end up getting stuck – like while trying to enter the Grafton Dam, or looking for clues inside. If you do, our Fallout 76 Cold Case quest will help you.

You’ll first have to access the amusement park’s security system. Once you do, check out all the entries – the holotape review, the alerts and operation notices. Afterwards, you should break into the safe in the floor and listen to the holotape inside as well. There’s one in the basement of the big, red brick building as well. It’s on a shelf. When you’re done with that, you’ll have to look through a mailbox and search for Freddy’s ID, which you’ll find at the top of the water slide tower.

The next step involves going to the Clarksburg Post Office. There was a bug that made the quest marker freak out and start pointing below the post office, even after you’ve compelted this step. It should be fixed by now, but if you experience it, try switching servers.

After that, the game will instruct you to search Otis Pike’s house, which means accessing a terminal in his basement. If you fix the KidSecure device (which is quite pricey but optional), you’ll find out it was removed by an “authorized person”.

How to enter Grafton Dam in FO76?

Your next step will be getting into Grafton Dam. Unfortunately, the doors are locked and you’ll need to have level 3 lockpicking to open them. Thankfully, you don’t have to. Go around the building, to the side facing the lake, and you’ll see two pipes going out of the wall. One of them will be missing a piece – jump onto it, then use it to get inside.

Where to find clues at Grafont Dam?

There are five clues you’ll have to find at the dam. They’re all marked, but we’re going to list their locations here as well, since the markers tend to be unreliable. The first one will be in the sack on your right, as soon as you leave the pipe. The second one is on the lower platform, on a dead body next to the generator. If you follow the stairs up, you’ll find the third one in a desk in the first metal cube office. Follow the path upward, and the fourth will be in another metal cube, on a shelf. Once you have that, turn left and jump off the broken catwalk, then turn around. You’ll find the last one there, in a sack next to Freddy’s secret spot.

How to search Woods Estate?

Your final task will be to search the Woods Estate. Once you get there, you’ll only see a yellow circle designating the area you’re supposed to search. You might easily miss the place you’re actually supposed to look. It’s the desk on the upper floor, the one where the terminal is. Read Freddy’s Note, and then all you have to do is visit Nanny Annie again to complete the quest. 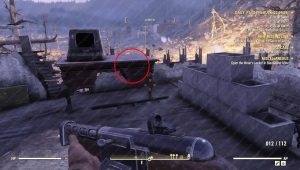