Patriotism training is one of the quests in Fallout 76. You can start it in Camp McClintock, by talking to Sergeant Gutsy after you’ve obtained your uniform, then interacting with the console in the building. Your task will be to “interrogate” three suspects and look for evidence in their rooms, in order to discover which one of them is a communist. This guide will show you who the traitor is and where to find Topher’s diary in Fallout 76.

Where to find Topher’s diary?

After you’ve interrogated Topher, you’ll get the objective to find his diary. This can be pretty difficult, since there’s a catch. You might spend quite some time looking around a room, searching for a notebook of some kind, when in fact, the diary is just a piece of paper. You can find it in the middle drawer of the dresser to the left of the speaker. Once you’ve read it, you’ll discover Topher is just a stand up guy. 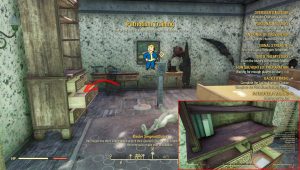 Who is traitor in Patriotism Training?

The traitor is actually Jimmy – he’s the smelly communist fighting for worker rights and against the American Dream. You’ll discover this by “talking” to him, then inspecting his terminal. After you’ve implicated Jimmy, you won’t have to even talk to the other two – so all you need to do is enter the middle room, press the button under the speaker a couple of times, then head to the terminal and interact with it.

This will give you enough evidence to take Jimmy away to a place that certainly isn’t pretty. That’ll conclude your Patriotism Trainining, which will allow you to move on with the Back to Basic quest, which includes an obstacle course and some more challenges. Once you’re done, you’ll be a full-fledged military person.