Black titanium ore is a crafting material in Fallout 76. It’s a rare resource you’ll need if you want to craft, repair and upgrade pieces of the X-01 power armor. Since that’s probably the model you’ll want to use most of the time (as it’s the best one), you’ll have to find a steady source of titanium. This guide is going to show you Fallout 76 black titanium ore locations, and the easiest ways to get it.

Where to find black titanium ore?

There are pieces of black titanium ore just lying around, waiting to be picked up. For instance, there’s some in the Hornwright Industrial building. You’ll need to start the Motherlode quest in order to get it, though. After you’ve cheated your way through the senior executive entrance exam, you’ll get an ID that lets you access the upper floors of the building. That’s where you’ll find some of this stuff. You’ll also get a handful of ore as a reward for completing the quest. This isn’t the most sustainable way of getting it, though. 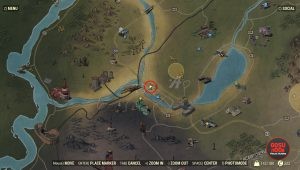 There are enemies that drop it when killed. Deathclaws should drop five to ten pieces of ore on death. Mole Miners have been known to drop pieces of the miner suit, which can be scrapped for a tiny amount of ore.

The most viable way of getting black titanium ore is mining it directly from nodes. There’s one at the Gorge Junkyard workshop, which is pretty close to Vault 76. Once you get there, you’ll need to claim the workshop for yourself, then build a harvester on the node. It will mine the ore automatically, sending a chunk to your stash every so often. Of course, this also means you’ll have to build up some defences there – concrete walls, turrets, the works. As soon as you claim it, NPC raiders will start attacking periodically, and other players are bound to be interested in the spot as well.

PREVIOUS POSTFallout 76 Brotherhood of Steel – How to Join Faction