Are you having performance issues while playing FIFA 23, such as micro stutters and frame drops? FIFA 23 is now out on PC, PS5, PS4, Xbox and the Nintendo Switch. And while fans are generally happy with how the game works in terms of gameplay, many others are suffering from a host of technical issues, such as crashing and freezing. Another glaring issue is poor performance, accompanied by FPS drops and stuttering. In our “FIFA 23 Performance Fix” guide, we share possible solutions for FIFA 23 stuttering, frame drops and other performance issues. 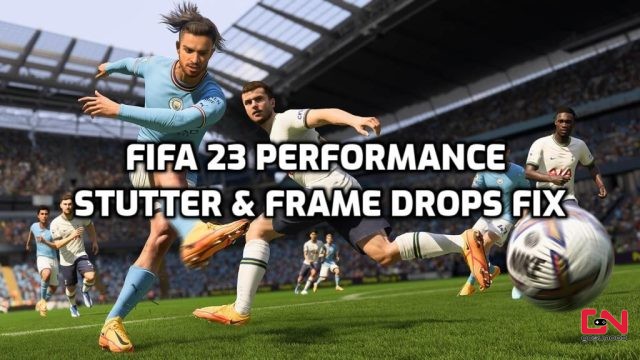 How to Fix FIFA 23 Stuttering, FPS Drops, and Performance Issues

Before we jump to possible solutions, let’s first stress some things. Firstly, you need to understand that FIFA 23 has just been launched. And, that there’s a general consensus that it’s currently not that well optimised. Thus, your performance issues and other technical problems come as a result of the game’s current state. However, that doesn’t mean that you can’t do anything about it. There are some steps you can perform in order to make sure that the issue is not on your side.

The very first thing you need to do is to make sure that your graphics card is up-to-date. Outdated drivers are the number reason for poor performance, low FPS, stutters, and frame drops. Thus, you should check for GPU driver updates. This can be done either via your GPU software or via the links below:

This FIFA 23 performance fix has been provided by Reddit user u/MrWoolskin. They claim that it has fixed stuttering and ” insanely improved performance”. Here’s what he advises:

Turn off the “Dynamic Resolution Scale” feature on your FIFA 23 video settings. A number of players report that this has significantly improved their performance in FIFA 23. Thus, if you have micro stutters in FIFA 23, this might help you.

When it comes to FIFA 23 micro stutters on consoles, u/Eskoto19 has come up with a possible solution. They state that turning off the new feature, called “Adaptive Right Stick Switching”, will fix the issue of stuttering whenever you are changing a player on defence with the right stick. Judging by the responses on the Reddit thread, it seems that this solution has helped many players, so try it out!

It has been reported that changing MSAA Level from 1 to 0 can do wonders for fixing stuttering in FIFA 23. However, this setting can not be found in the in-game menu. Rather, you’ll need to change this parameter from your operative system. Here’s how:

Believe it or not, apparently, FIFA 23 comes set with 4k resolution as default. And that’s definitely not an easy task to run for many PCs out there. Thus, make sure to change your resolution to something that your PC can handle. The best resolution to choose is the one that matches your monitor (1080p or 1440p). To change the resolution, in the game menu go to “customise>game settings>display configuration”.

And that’s about everything we can currently offer you as a possible solution. As we’ve already stated, the game’s performance is currently rather bad due to poor optimisation. Hopefully, some of these offered solutions might help you alleviate some of the problems until developers fix them themselves. Do you have any potential fix that has helped you with FIFA 23 poor performance? Share with us in the comments section!