Final Fantasy XV Holiday Pack DLC and Holiday Pack + are live. They add a bunch of useful new items and tickets to a carnival that will go live in January. However, a lot of people have been experiencing the Waiting to Install DLC glitch. The installation of the pack just freezes and refuses to work. For this reason, we’ve put together this Final Fantasy XV Waiting to Install Error & Solution guide. 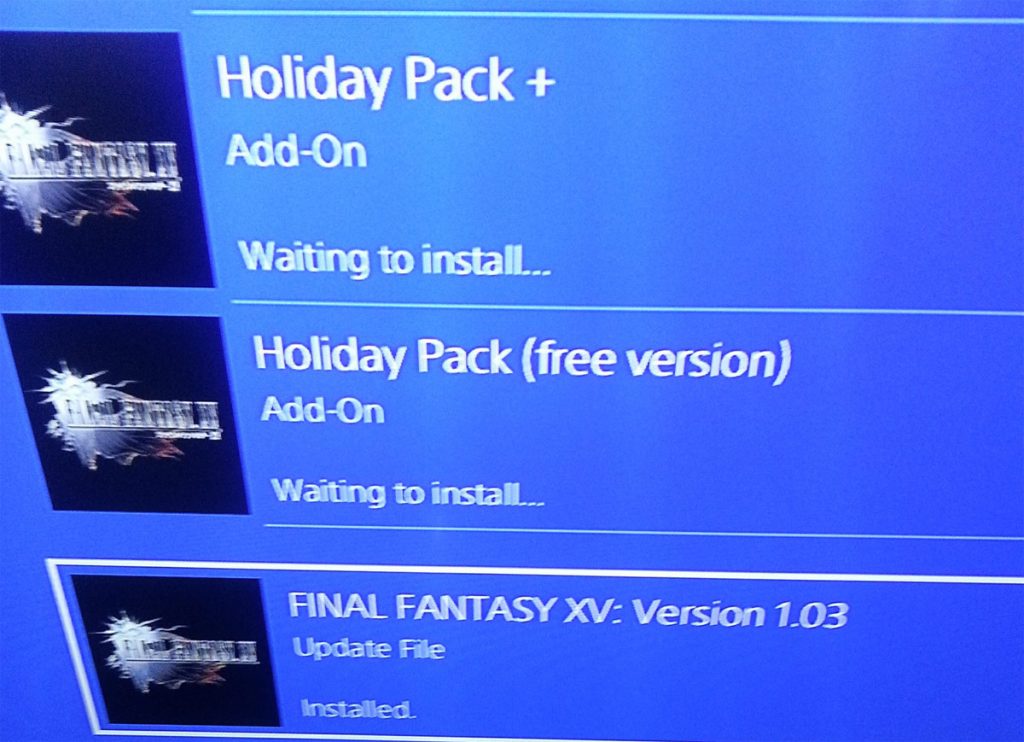 To solve this problem, there are several fixes you can try. Since this glitch can be triggered in several ways, there are multiple possible solutions. We’ve sorted them from least to most hassle. Note also that these workarounds might fix the same bug in other games. Here we go.

Make sure your game is up to date

Sometimes, the solution really is that simple. Often, installing DLC requires that you have the most recent version of the game. It’s simply coded to be compatible only with the newest update. Go to the home page, hover over the game and hit the Options button on the controller. Click on Check for Updates. If there’s an update you’ve missed, that should fix everything.

Stay on the game page until the DLC downloads

Simply put, in some instances, the PlayStation store won’t install DLC unless you’re on the game’s store page. So, hit the Install button and don’t navigate away until you get the message that the installation is complete. It pops up in the left corner.

Yeah, it’s a little stone-age, but it works. Press and hold the power button for about eight seconds, and there you go.

The game and the DLC are from different countries

This one is a bit complicated, so bear with me. Let’s say you bought the game on a disc in Europe. However, your PlayStation is American, and you’ve bought the American DLC. If that’s the case, they won’t work together. If you’re not sure where the game is from, look for the CUSA code on the disc. It’s a five digit-code. Type that into Google, and it should solve the mystery. If this is your problem, you’ll have to find a way to get the DLC that matches the game’s country of origin.

The PlayStation Store is getting an update

Sometimes, if the PlayStation store is about to get an update, the DLC download just won’t work. Unfortunately, there’s nothing you can do about that other than wait and try again after the update.

Those are our five possible workarounds and fixes for the Waiting to Download glitch. Hopefully, one of these will solve your problem, and have you celebrating the holidays with the Final Fantasy XV Holiday Pack.