FFXV Black Chocobos are a special subspecies of everybody’s favorite Final Fantasy bird. They’ve had various abilities over the years, but the thing that always made them special was that they were the only kind of Chocobo with the ability to fly.
▼Article Continues Below▼
They’re notoriously hard to obtain, and they’re nearing extinction. This guide is going to show you how to get black chocobo in Final Fantasy XV. 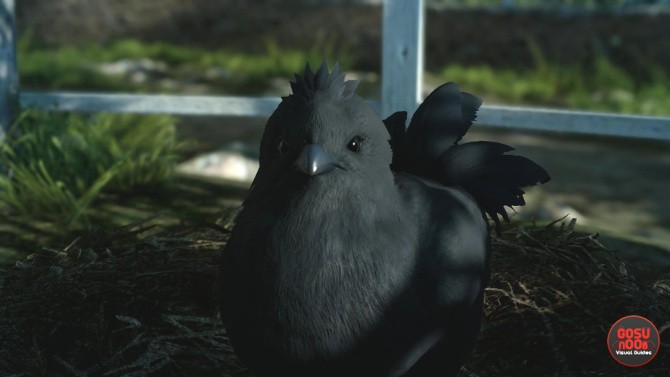 After you’ve helped Wiz with enough stuff, he’ll offer you the Savior of the Species quest. Go to the Wiz Chocobo Post and talk to him to start it. He’ll tell you of an orphaned chocobo egg that needs rescuing.

You’ll have to go to a spot in the far north, near Vesperpool. The egg is in the woods there, but it’s guarded by a bunch of lvl 18 Sahagins – giant crocodiles, basically. They’re not too tough, but their strength lies in numbers. Keep on your toes. When you defeat them, take the egg and bring it back to Wiz. He’s going to pretend to be its mom for the next couple of days.

He’ll let you know once the egg has hatched, so you can go visit the chicklet. Since it’s only a baby, you can’t ride it. Just seeing it will melt your heart, though. Maybe it can grow up during the game, after enough time passes. We still haven’t been able to check that out, but we’ll update the guide if we have any more information.

If you want to ride a black chocobo, there may be another way. Final Fantasy XV doesn’t have chocobo breeding or taming, but it does allow you to change the color of the chocobos you rent. This doesn’t change their abilities though, only their look. There might be a way to obtain black plumage that will allow you to customize your rental and make it black.