Frogs of Legend is a quest in Final Fantasy XV. It is the last step in the Professor’s Protege chain.
▼Article Continues Below▼
It involves helping Sania find rainbow frogs, and ends with some pretty amazing rewards. The frogs are extremely hard to find, and she won’t help you at all. In this guide, we’re going to show you how to complete Final Fantasy XV Frogs of Legend quest and where to find rainbow frogs.

This quest comes after a long and arduous journey of finishing all the steps of the Professor’s Protege quest. You’ve probably already gotten used to frog chasing by now, so you know what to expect from the young scientist. As always with these quests, the best tip I can give you is to listen to the sound frogs make while near bodies of water.

Where to find 5 Rainbow Frogs in FFXV

To start the quest, go to the outpost near Risorath Basin, east of Vesperpool. You’ll find Sania in the same place where you’ve already met her. She’ll ask you to find 5 rainbow frogs. 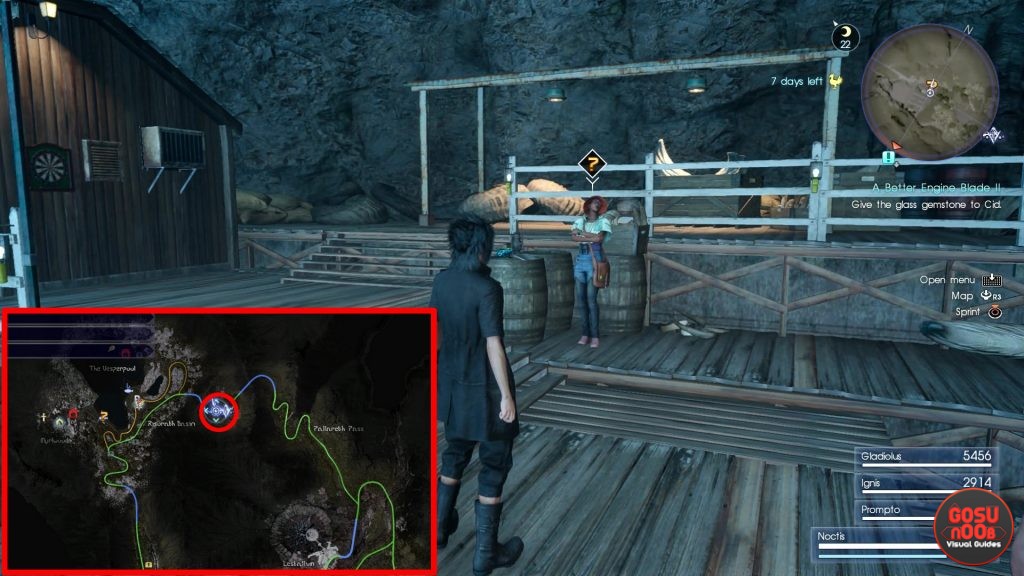 The problem is that this time, she won’t even offer to show you the approximate locations. She only has a sparse hint for you – they live near water. That’s it. You’re on your own.

There’s a trick you can employ with the frogs. It will help, but only if you’ve figured out the general area. The frogs croak audibly. When you’re in their vicinity, they’ll start making noise, and it will only get louder as you get closer. This will help you pinpoint their exact locations, once you’ve figured out where to look. For the purpose of this guide and finishing the quest in the game I visited each body of water in the game and scouted its shores until I heard the frogs.

The first rainbow frog is hiding around one of the lakes in southwestern Alstor Slough / northwestern Nebulawood. Specifically, it’s around the second largest lake, on its northern side. Near the base of the huge stone arch beside the lake, there are some trees. The frog is hiding among those trees, so keep an ear out and follow the croaking until you find the first Frog of Legend.

The following rainbow frog is not too far off. You can find it on the east side of the pond next to Saxham Outpost. The frog is hiding behind a big boulder, next to some low growth. Listen for the croaking and you’ll find it easily.

You’ll have to do a fair share of travelling to get to the next frog of legend. It’s located on the western bank of The Vesperpool, just north of the Western Vesperpool fishing spot. The frog is sitting on a tiny, muddy “island”.

The final frog is not too far off from the previous one. Go to the river bank, in the southeast corner of the facility between the two rivers. Coming from the south, walk along the bank, and look for a large rock just before you reach the huge concrete dyke. The frog is hiding behind it, next to the water. Once you’re done frog hunting, take them back to Sania, and you’ll get: