Visit Panther’s Prowl is one of the challenges in Fortnite Battle Royale. In order to complete it, you’ll have to visit a certain location. It’s not one of the named locations – it’s a landmark, and a new one at that. With that in mind, you might have trouble finding it in the severely redone map. If you do, this guide will show you Fortnite Panther’s Prowl location, to help you complete the weekly challenge.

Panther’s Prowl is a landmark, a giant statue of a black panther. It’s a design based on Marvel’s comic book character, which makes sense, since this is the season of the Marvel crossover. It’s visible from the air, but you’ll still need to know where to look and when to jump out of the battle bus.

You’ll find the statue on the hill west of Misty Meadows, in the southern part of the map. If you’re playing for the first time since the update, the area will be greyed out. Also, the statue really is freakishly large and there’s no way you could miss it. It’s a black monument with an orange postament. It’s probably even visible from space. 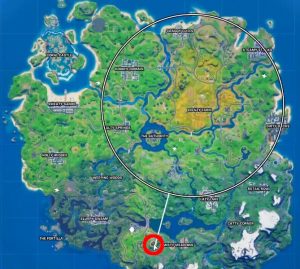 Since all you have to do is land there (or visit by foot, we won’t judge), it’s going to be one of the easiest challenges this week. Unlike most challenges, this one won’t have you worrying about griefers, since it can be completed withing seconds from landing. Even if someone is waiting with a gun pointed towards the general area of the statue, they won’t be able to do much before you’ve earned your green check mark. Since that is the case, we suggest you complete this one as soon as possible, and leave the more difficult ones for later.