This week’s Wolverine challenge in Fortnite Battle Royale tasks you with finding a sentinel head at Dirty Docks. If you’ve been to the sentinel graveyard before, you’ll remember it’s nowhere near Dirty Docks. But that’s the only place with sentinels on the entire map, right? Wrong. The latest update adds more of the giant robot wrecks, and this guide will show you exactly where to find them, so you can complete Fortnite sentinel head at Dirty Docks Wolverine challenge.

Where to find sentinel head at Dirty Docks?

As the name of the challenge implies, it’s at Dirty Docks. Well, not strictly “at”. The new giant robot isn’t at the docks themselves – you’ll find it on the slopes of the hill overlooking the docks from the west (quadrant G4). 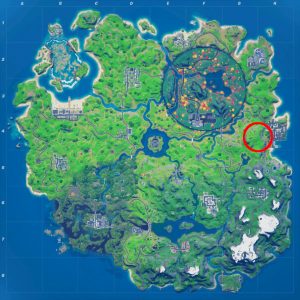 Thankfully, it’s dead, much like the other sentinels. You won’t have to fight the giant monstrosity. To complete the Wolverine challenge and get the back bling, you’ll simply have to approach its head and interact with it. That’s it – walk up to the noggin, rub it gently, and you’ll get your reward.

Keep in mind that thousands of others will be trying to do the same things at the same time, and some of them might not have a friendly disposition. If you’re not going there directly from the battle bus, expect a well armed welcoming committee. Even if you are landing there, there’s always a chance someone will beat you to it, grab a loose weapon and lie in wait.

If griefers are causing you trouble, our suggestion would be to leave this challenge for next week. Once most people finish the challenge, the mean spirited bandits will move on to greener pastures, and you’ll be able to pry the head off the giant purple robot in peace.