Collect Stone from Rapid’s Rest is one of the week 7 challenges in Fortnite Battle Royale. It’s pretty straightforward – you go to a place, you whack stones with your pickaxe until the challenge notification pops up. Except… none of the named locations on the map is called Rapid’s Rest. If you’re having trouble finding this mysterious place, this guide will show you Fortnite Rapid Rest location, to help you finish the challenge.

Where is Rapid Rest Fortnite

Rapid Rast is a tiny little place on the river directly east of Lazy Lake. You’ll recognize it by the bunch of beached kayaks. Land there and start whacking any of the big stones, and soon enough you’ll comlpete the challenge. It’s pretty weird that the challenge would refer to the place by a name when that name isn’t visible on the map, but it’s probably just a bug. 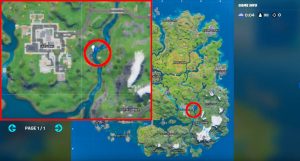 The challenge doesn’t mention how much stone you’re supposed to harvest there, so just keep at it until you see the notification. There’s loads of big rocks around the little hut and the boats, so it shouldn’t be too hard. The only problems is that, as usual, the place is going to be highly contested. Millions of players are flocking to Rapid Rest – those that have figured out where to find it, at least – in search of rocks. Coming there later in the match won’t help, as the stones will already be gone. What you can do, if it all becomes a bit overwhelming, is wait a couple of days. Most people usually finish these in the first two days, so it should be much easier to collect the stones in peace at the beginning of next week. Plus, the griefers will hopefully grow tired of killing defenceless players in droves by then.