Summit different mountain peaks is one of the week 6 challenges in Fortnite Battle Royale. You’ll need to complete it if you want to get all the Battlepass rewards. It requires you to visit ten different mountain tops across several games. Since there are around a dozen hilltops in total, it can be a daunting task. That’s why we’ve decided to write a guide with Fortnite BR mountain peak locations.

There are more than ten hilltops on the map, but we’re uncertain whether the game registers each of them as a mountain peak. The ones we’ve marked on the map, however, are all proper mountainous. Best of all, you can visit them all in one or two games. Since the objective is to summit and not land on them, you can get several in one match. They’re all on the western half of the map, so you could land around Pleasant Park and visit half, then land near Shifty Shafts and get the other half. 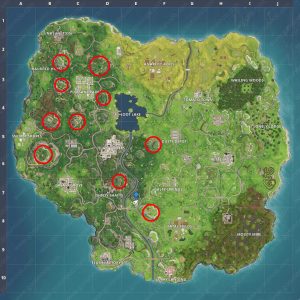 You don’t have to rush it, though. The challenge does start on week six, but it will be available until the end of the season, which is after week nine. This means you have four more weeks to actually complete this. If you’re not particularly good at the game, you might want to leave this one for later in the week, or even early next week. It’s going to be pretty crowded now, as most players will try to complete the challenge today.

Once you reach a summit, you’ll have to place your flag there. It takes a few seconds, but it’s nothing too demanding. You won’t lose a match just because you’ve stopped to pin your emblem into the hill. Although, we’d advise against doing it when the ring tightens.