Talk to Joneses is one of the Raz challenges in Fortnite Battle Royale. In order to complete it, you’ll have to – surprise, surprise – talk to a bunch of Jonesies. They can be found in various places around the map, and talking to them gives you the option to ask for guidance – they can give you quests, sell you stuff, activate rifts or reveal treasures and vehicles in the area. Since they do a great job of blending in with the surroundings, you might have a hard time finding them. If so, this guide will show you all Fortnite Talk to Joneses locations, so you can complete the challenge.

Where to Find Joneses Locations in Fortnite

The order in which you visit them isn’t important. When you find one, talk to him – pick The Spire option, then go through the various others until the counter shows you’ve talked to one more. Here’s where you can find them: 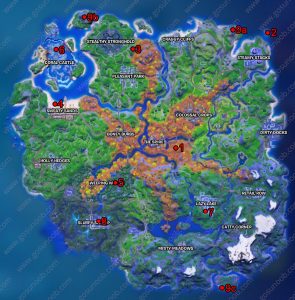