Wolverine is a new boss in Fortnite. This NPC can be found roaming a specific area, and he’s hostile to players. Defeating him will allow you to take his claws and use them in combat. Since he’s as new as can be, players have a lot of questions – the most common ones are where does Wolverine spawn and how much health he has. This guide will show you Fortnite Wolverine spawn locations, as well as how beefy he is and what kind of item he drops.

Where does Wolverine spawn in Fortnite?

Wolverine can spawn in and around Weeping Woods. He mostly appears along the norther border of the forest, and in the southeastern corner. However, he can also materialize south of the woods, on the northern edge of Slurpy Swamp. Some have even found him as far as Holly Hedges, west of the forest. 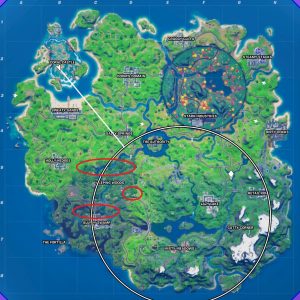 He’s pretty tiny, so it can be difficult to spot him while he roams the woods, especially when he wanders into the darker areas. Once you find him and manage to defeat him, he’ll drop the Wolverine Claws, a unique legendary weapon akin to the superhero weapons and powers we’ve already seen.

How much health does Wolverine have in Fortnite?

Another burning question regarding the new boss concerns his health. Players are wondering how much health does Wolverine have in Fortnite, since the game doesn’t show you a number. We don’t know for certain, but estimates put both his health and shield between 600 and 1000 points. That’s not the worst of it, though – like the comic book hero he’s modeled after, this Wolverine also has rapid health regeneration. This means you’ll have to gang up on him and press on until he’s on his back in the mud. If you leave him alone in order to reload or heal, he might do the same.