COG Tags are collectibles in Gears of War 4 that, once you get all 10, unlock the Remember the Fallen achievement.They also count towards the Collector, Pack Rat and Completist achievements (Recover 5/10/all Campaign collectibles respectively). They are scattered throughout the campaign and give you a better insight into the hardship soldiers of the GOW series went through. This guide will list locations of all COG tags per Act and Chapter, as you come across them. There are also posters, newspapers, magazines and other collectibles (50 in total, including tags) for you to find throughout the campaign, but these will be covered in other guides. You can come back to any chapter, once you’ve played through it in case you missed any of the collectibles. You can also quit out of a chapter once you’ve found the missing items, because the game marks the collectible as found as soon as you pick it up (no need to play through the end of the chapter you are repeating). 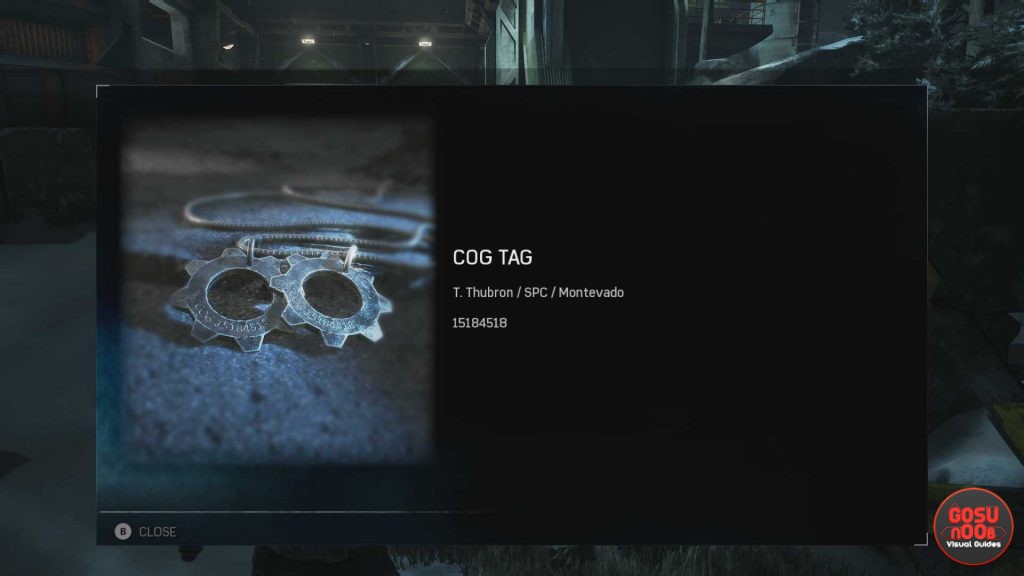 There are 3 tags for you to find in the game’s prologue.

You have a mission to clear a bunker with a nasty machine gun shooting at you. Once you clear it with a well placed grenade you go through it and enter a courtyard with a large door. There is another bunker across the one you destroyed. As you exit that bunker go right. Alongside the left edge of the path is the first tag of the game.

After the cinematic you start the second part of the prologue. You’ll get to use the Hammer of Dawn to clear some enemies in a little square after the Colonel enters the building. Go to the right of where you spawn and at the base of the building there are stairs with a fallen soldier and the collectible on him. 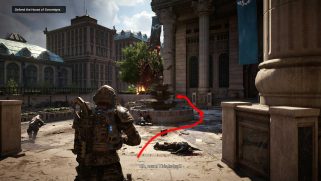 Next one is found in the third part of the prologue. As soon as the cutscene ends and you find yourself in another era of the fight against Locust there will be a burning vehicle right in front of you (this is after you have to revive one of your teammates and the game tells you to climb the ladder and get on the wall). Go behind the vehicle and the last COG in the Prologue is found on the ground. 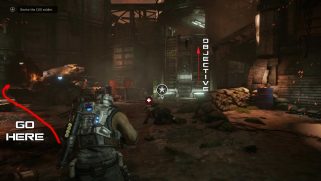 You won’t come across another COG tag until you reach Act 3. There are three of them to be found during various chapters.

When Chapter 2 loads up you’ll go through a broken down stable. As you exit turn left and you’ll see a greenhouse, next to which is a body of a soldier and his tags next to him.

As you progress towards the museum you’ll get to the area with a turret. Make way up the stairs and you should enter a room with sheet covered furniture. Before you continue the battle outside notice the military crates scattered in the back of the room. Go behind them and you’ll see a cover made of shelves you can hop over into an alcove behind. Skeleton there holds your prize.

As you drop down a hole at the start of Chapter 4 the objective will guide you to go left. Instead, go right and up a small flight of stairs to find the COG tag in the corner.

Three more tags await you in the fourth act.

At the very begging of chapter 2 follow the path ahead of you and, as you pass the large tubular/cog like structure embedded intro the rock-face on your right, you should come across a dead soldier and his tags on the left side of the path.

You’ll make some progress through the fourth chapter before you enter the area with a lot of control rooms and as you go through two large crushed pipes, there’s a room to your left with its back wall smashed. The room has a console in the center of it. Go behind the console to find a body of a soldier leaned onto the it.

As you enter indoors in Chapter 5, go to the room to your right, before going through the door the objective is leading you to. COG tag is on the table with a computer on it.

This is the last tag for you to pick up and it is found during the first chapter of the final Act. You’ll enter a courtyard with a statue in the middle of it. As you enter go right immediately and you’ll see a small path which you should follow until the end where you’ll get your final COG Tag and unlock the Remember the Fallen achievement.

PREVIOUS POSTHow to unlock side missions in Mafia 3