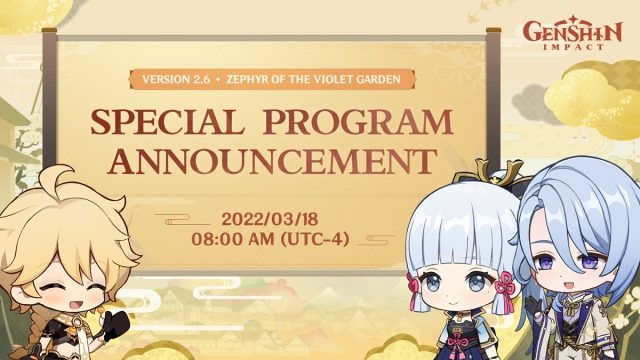 Genshin Impact developer HoYoverse, formerly known as miHoYo, has officially revealed information about the stream. The Genshin Impact 2.6 livestream will be held on March 18th 2022 at 8 am ET / 5 am PT / 1 pm CET / 12 pm GMT. It is expected the livestream to last around 30 minutes.

How to watch Genshin Impact 2.6 Livestream

As usual, the special program for Genshin Impact’s 2.6 version will be broadcasted live on the official Genshin Impact Twitch and YouTube channels. The developer doesn’t have an official rule that forbids streamers from streaming the event. Thus, you can watch your favourite Genshin streamers commenting on the event.

In the weeks preceding the 2.5 Special Program live stream, many leaks have revealed details on what can we expect. The developer confirmed previous leaks of the new Chasm region, which hosts enemies such as the Ruin Serpent. The Chasm is an underground mining region, but it also has an area called “The Surface”, which is situated right above the mines. Being a mining area, the region is full of mysterious ores Travelers will have to discover on their adventures. This new, unexplored region is set to release with Genshin Impact 2.6.

Another leaked 2.6 content is a brand new character, Kamisato Ayato, who was first spotted at the end of Arataki Itto’s character teaser video. Not much is known about him yet, but we are sure that more details will be revealed during the livestream. With that said, that’s all you need to know about the Genshin Impact 2.6 Special Program. If you miss it live, you can always watch it again on the game’s YouTube channel.

NEXT POSTBrawlhalla Legends That Have Traveled to Outer Space