Ever since they were introduced to video games, Achievements have always been one of the most fun aspects of modern gaming. Genshin Impact has a lot of Achievements that you can complete, but it also features Hidden Achievements as well. These are so called because they aren’t visible in the Achievements list until you unlock them. With the recent Genshin Impact 3.4 update, several new Hidden Achievements have been added to the game. To save you the time you would have needed to spend to figure out how to get these, we are going to list them all out here, and also explain what you need to do in order to get them. 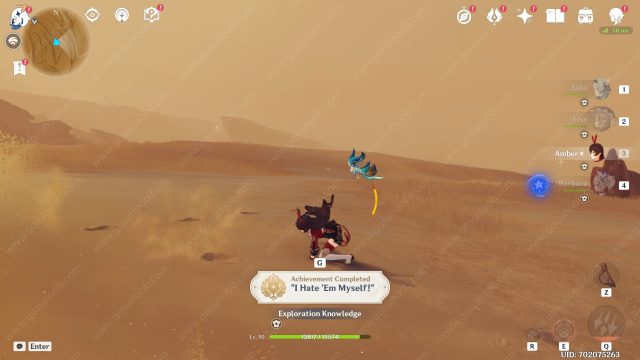 The first HA you can get is called “On a Magic Carpet Ride”. To get it, head to a hill near Old Vanarana and complete the Time Challenge there. Next, “I Hate ‘Em Myself”, “Flat Out”, and “He Who Controls the Spice”. All of these are connected to the Setekh Wenut. The “I Hate ‘Em Myself” requires that the Wenut hits you while you are walking in the desert, the “Flat Out” is similar to this, but has it destroy a rock instead, and “He Who Controls the Spice” is gained when you destroy the two Anemo Orbs that the Setekh Wenut world boss summons during the fight against it.

“The Perfect Sandstorm” requires that you wonder into a sandstorm near Mt. Damavand. To get “Isn’t Life Wondrous?”, you need to activate all the Wenut Tunnels shortcuts. “The Ancient Orchard and Spring” is unlocked once you solve all of the cascade pool puzzles. For “Genesis of the Rift”, read all six Pathfinders’ Logs. And, for “The Nameless City’s Past”, find all six Mysterious Stone Slate locations. Those are all the Hidden Achievements that we have found out so far in the game. If you have found more, please share their names and how you managed to get them in the comments.