After you finish Act 3 of the Midsummer Island Adventure in Genshin Impact Golden Apple, you will notice that Diluc, Albedo, Razor, Kaeya, and others are scattered all across the Golden Apple Archipelago and that you need to find them if you want to have chats with a character. Some of these characters are clustered together, while others are much further apart. Finding all of them isn’t an easy feat and you can spend a lot of time combining every inch of the Archipelago. Luckily for you, we’ve already done all the searching. Our Character Chats Locations – Genshin Impact Diluc, Albedo, Razor, Kaeya, Klee, and Jean guide will show you exactly where all of these characters can now be found. 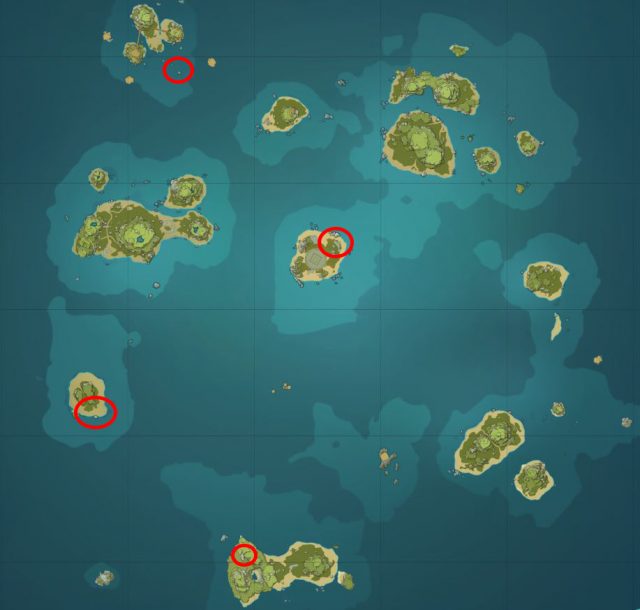 We will be showing you where you can find Diluc, Albedo, Razor, and Barbara first. So, let’s begin. Razor and Barbara can be found on the large island between Broken Isle and Twinning Isle. They are located a short distance from one another on the northeastern corner of this island. Barbara is directly by the rocks, while Razor is a little bit to the right from her. Diluc’s location is interesting. He is standing on the rocks overlooking the island northwest of Twinning Isle and north of Broken Isle. When you use the Teleport Waypoint on that island, he will be clearly visible, so swim over to him and have a character chat. Finally, Albedo is on Minacious Isle. He is on the northwestern point, standing atop a cliff.

Kaeya, Klee, and Jean are all together on an island directly south of Broken Isle. They are on the southern beach, all three within short walking distance from one another. Simply approach each one and initiate character chats. And that’s it, you now know all Character Chats Locations – Genshin Impact Diluc, Albedo, Razor, Kaeya, Klee & Jean. We also have a video that shows you all the topics you can now discuss with these characters. You can watch it directly below. Also, we invite you to check out our Genshin Impact section, since we are publishing new Genshin content all the time.