“Outside the Canvas, Inside the Lens” is a photo-taking challenge in Genshin Impact. Taking place over several days, each of these challenges requires that you – naturally – take photos of your Genshin Impact characters in certain places, often doing specific things. Take the “Aporia of the Valley” task. It requires that you take a photo in Tianqiu Valley, Liyue, of a Catalyst-wielding character, while they are using a charged attack. This last bit is giving a lot of players trouble. So, here, we are going to explain how to do a Charged Attack for a Catalyst Character in Genshin Impact. 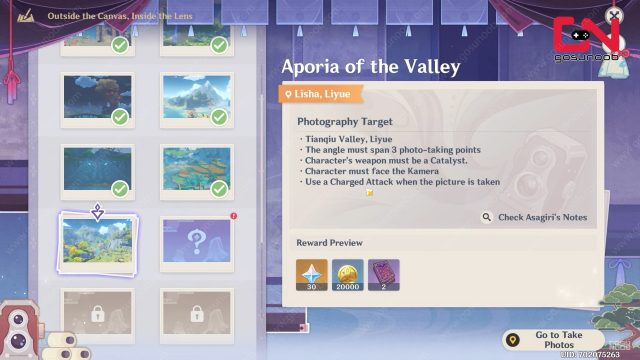 How to Use Charged Attack for Catalyst Character Genshin Impact

To be able to use a Charged Attack with a Catalyst character, you will first, of course, need to do this with a character that has the Catalyst as their weapon. These include the following characters: Lisa, Barbara, Klee, Mona, Sucrose, Yanfei, Kokomi, Ningguang, and Yae Miko. So, select one of these and make your way to Tianqiu Valley in Liyue. Now, besides the Charged Attack, you also need to keep in mind that the photograph needs to be span 3 photo-taking points, and that the character has to face the camera while you are having their picture taken.

The reason why this is so difficult for some players is that they are holding down the E (elemental skill) button for this. What you should be doing instead is to press – and hold – the normal attack button. If you have fulfilled every other criterion for this picture, doing this will result in you successfully taking the picture correctly and completing the “Aporia of the Valley” task. You can see how we have done this in our video. And that’s how you perform a Charged Attack with a Catalyst character in GI. Simple, once you know the trick to it.