A new special event called Tuned To The World’s Sounds has been added to Genshin Impact 2.2. To be able to start it, you will first need to complete the “Wishes” quest to unlock this event. Otherwise, you will not have the option to begin this musical-themed event. In this Complete Wishes to Unlock Event – Genshin Impact Tuned to the World’s Sounds guide, we will explain what you need to do to unlock this event, as well as how to compete in it so that you can earn rewards. 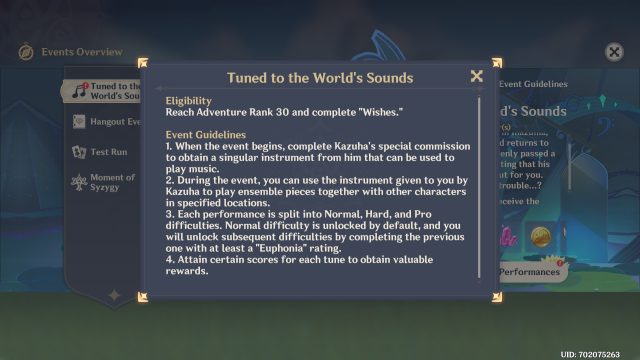 This Tuned to the World’s Sounds event will last from October 15th until October 25th. In order to take part in it, you will need to be at least Adventure Rank 30, and to have finished the Archon quest “Wishes”. If you fulfil all of these prerequisites, the next thing you need to do is to talk to Juza in Liyue Harbor. Then, follow the quest marker which will lead you to Kazuha. After speaking with him, you will now get musical notes on your map. These indicate places where you can play. Head to these and play against different characters. New musical partners will be unlocked every day.

The musical game itself is rhythm-based, requiring you to to hit certain keys (which correspond to notes) in the right time sequence. Also, the game has three difficulty levels: Normal, Hard, and Pro. To be able to unlock the Hard difficulty, you will first need to play on Normal, and to unlock Pro, you will have to play on Hard. After playing, you will be rated according to how well you played. There are four ranks you can get: Leggiero, Euphonia, Dulcem, and Discantus. Besides the usual prizes such as Primogems and Hero’s Wit, you will also be able to get the Floral Zither on the final day of this event.