Echoing Conch #1 Chapter VII None Return Broken Isle – You need to go to the northern one of the three rocks that make up Broken Isle. To get there, you’ll need to teleport to the west island, then summon the Waverider and sail it to where you need to be. In the north of said rock, there’s a small shelf below the very top. That’s where the Conch is.

Echoing Conch #2 Chapter I Four Winds Bring the Sound of Joy Twinning Isle – The first Genshin Impact Echoing Conch on Twinning Isle is on the northern of the two islets. Go to the teleport waypoint, and then head east from it. Drop down to the rock shelf that has a large tree growing on it. You’ll find the Conch among some planks and other debris.

Echoing Conch #3 Chapter I One River Flowing Down the Middle Twinning Isle – Go to the southeast of the southern islet. There, you’ll find a small cauldron, and what appears to be the ruins of a house behind it. The Conch will be inside said ruins. You will have to clear out some Hilichurls, so be careful.

Echoing Conch #4 Chapter VII The Price of Experimentation Pudding Isle – To find this Genshin Impact Echoing Conch, head to the teleport waypoint on Pudding Isle. Look to the east, and you’ll see another ruined house. The Conch will be just behind it, hidden from view by a box.

Echoing Conch #5 Chapter IV The General Pudding Isle – From the Pudding Isle teleportation waypoint, simply go to the southwest. You can easily hop and fly over to the second islet that makes up Pudding Isle. The conch is out in the open, on a rock. It’s very easy to find.

New landmass has appeared out of the sea during the second part of the Midsummer Island adventure. There are 23 new echoing conches to be collected on the newly emerged land mass. They are found on both the old isles that are now bigger and taller as well as the newly available islands. Let’s start with the seashells found around the central platform you’ll finish the main quest of the second part of the event.

Echoing Conch #6 Chapter IV – Stoic Bloom is found on the central platform island where you find the Dodo-king mask. From the platform move north up a small incline. Conch is located next to a broken pillar on the floor.

Echoing Conch #7 Chapter IV – Homeland is the second seashell you can pick up on the central platform with the Dodo-king mask. You now have to go south of the platform. Move towards the beach and you should see some brushes among the rocks. Look for the item on the ground nestled among the bushes and near the rocks. 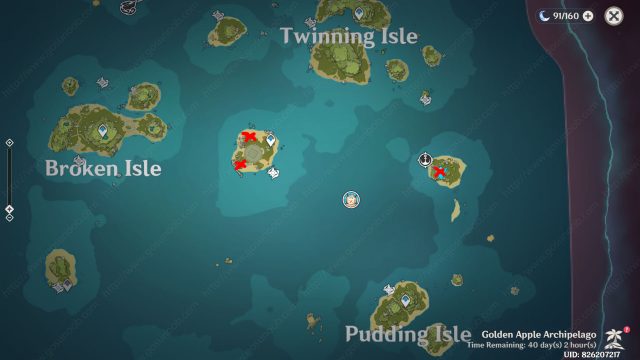 There are six new echoing conches now that the grounds has risen on Twinning Isle. Echoing Conch #9 Chapter V is called Moon and Wind and is found next to the waypoint on the Twinning Isle. From the waypoint glide down the cliff in southwestern direction. You need to glide into a cave opening in the cliff side. Break the stone wall to reveal a hidden cave. There’s some furniture in the cave and the conch is on a wooden crate. Second new seashell on Twinning Isle is Echoing Conch #10 Chapter I and is called “The Clan of Song, Scattered”. Go to the mountain peak west of the one with the waypoint. Drop south and glide down the cliff. There’s a protrusion with the conch on it. Lastly go to the northwestern tip of the island. You’ll find a cave inside which is Echoing Conch #11 Chapter VII 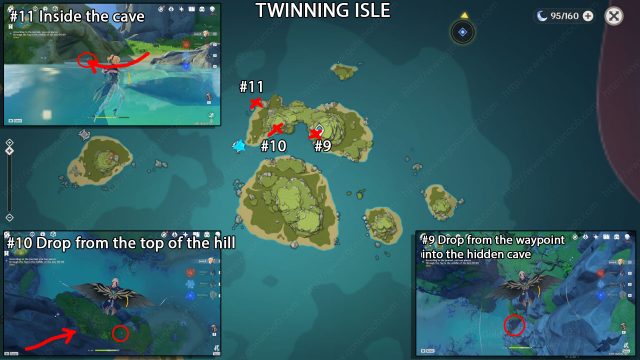 Echoing Conch #12 Chapter I is found on one of the small eastern islands of the Twinning Isle. Climb up on top of the isle marked on the map below and jump southward onto the ledges containing a chest as well as the seashell. For the next one go even further east. Echoing Conch #13 Chapter I is found on the easternmost Twinning isle. You need to be looking along the beach on the southern point of the island. From the beach look at the cliff and the conch is on one of the rocks. 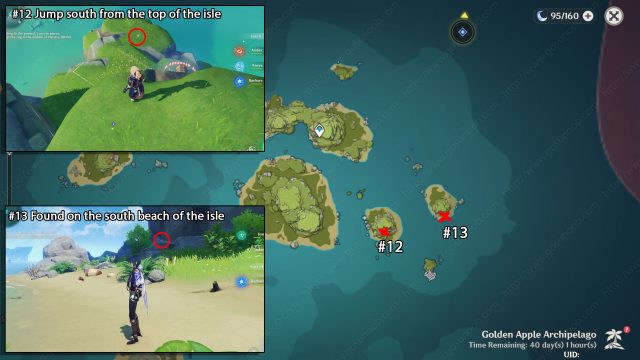 The sixth and final new Twinning Isle Echoing Conch #14 Chapter VII is on the large island in the middle of this part of the archipelago. The conch is very well-hidden on the cliff wall on the south side of the island. You’d honestly never think of looking there, even when following the location on your mini-map. So, here it is below. 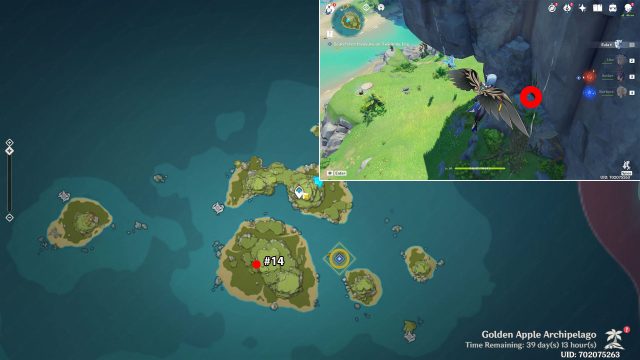 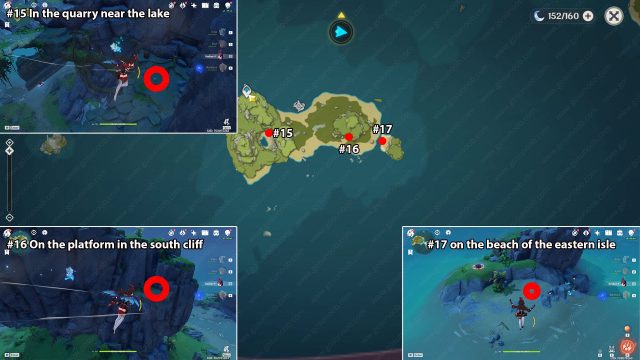 You can find two new Echoing Conches locations in Broken Isle in Act 2. Echoing Conch #18 Chapter VII is on the northwestern part of the cliff side of the central mountain, in a small alcove that’s nearly impossible to se from ground level. I recommend gliding down from the top and keeping an eye out on the cliff. Echoing Conch #19 Chapter VII is easier to find. It’s on the very top of the huge stone spire in the northwest of the islands. You need to ride the wind gust all the way up. 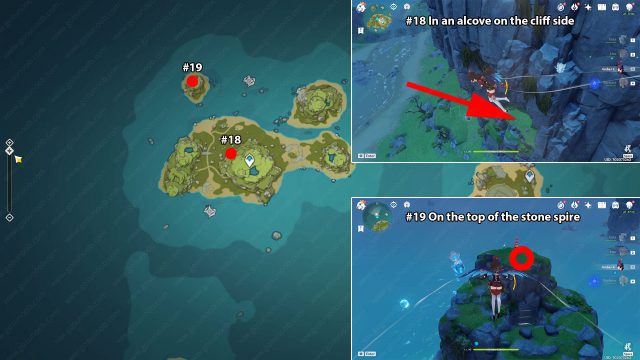 There are two new Pudding Isle Echoing Conches locations that you can find on Act 2, or Day 2. The first one, Echoing Conch #20 Chapter VII, can be found on top of the small island to the east of the main Pudding Isle landmass. It’s behind a small bush, so you do have to look a little closer. As for Echoing Conch #21 Chapter V, that one’s on the jagged rocks even further to the east. There’s a small platform near the top of the “spire,” and that’s where the conch is. Since it’s pretty much the only part that you can stand on, it’s hard to miss. 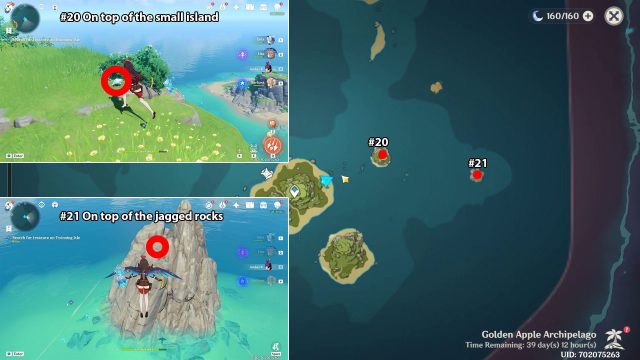 Final seven Echoing Conches are scattered among islands that don’t necessarily belong to any of the isle groups marked on the in-game map. We’ll start with the island in between the Twinning Isle and Broken Isle. Echoing Conch #22 Chapter II is called “Where Duty Lies” and is found on top of the island’s mountaintop. Look for a shipwreck and next to it is the seashell. From there glide down westward. Reach the beach at the west point of the island. Conch is next to some ruins and a challenge point. It is Echoing Conch #23 that belongs to Chapter III. 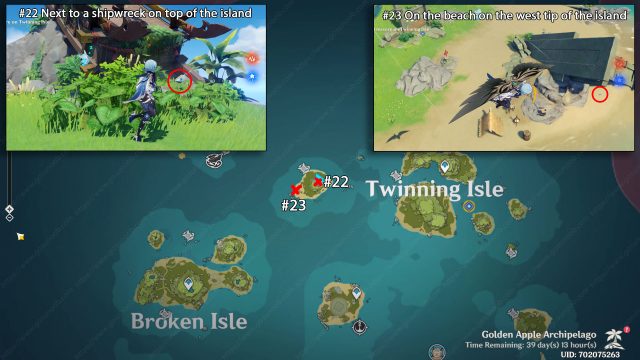 Visit the isle northwest of the previous one for another two seashells. This larger island group with three peaks is found north of the Broken Isle and west of the Twinning Isle. Echoing Conch #24 Chapter III is found when you glide off the top of the northernmost peak of this island. Glide down slightly east and you should see a path going up this mountain peak. Conch is next to two blue crystal nodes. Another seashell is on top of the wooden platform found on top of the southern peak of this island. You can glide over there or climb from the bottom. You’ll have to defeat the enemies to be able to pick up the echoing conch. It is inside a small wooden cage and this is Echoing Conch #25 Chapter III 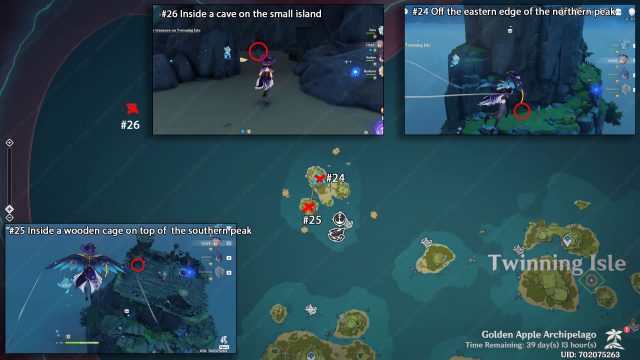 While you’re there you should sail to a little southwestern island. You’ll find Echoing Conch #26 Chapter V there. Reach the island by boat and then disembark on the beach. The wall seems solid, but if you approach it an illusionary wall will disappear. Seashell is inside the cave.

Last two conches are found on remote islands at the edge of the map. For Echoing Conch #27 Chapter V you have to go all the way west from Minacious Isle. The small rock formation holds a hidden cave with a painted wall in the middle. You have to break the rock just left of the painted wall. This reveals a small cave with the seashell. 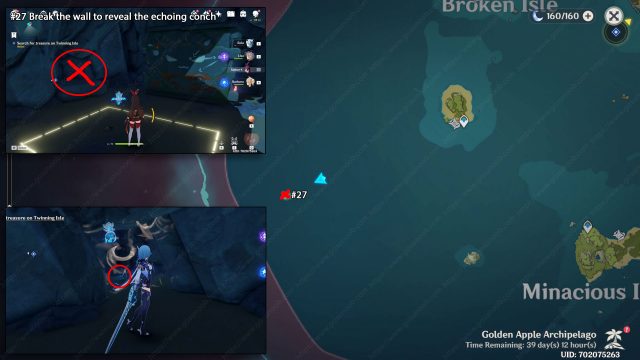 The last collectible for Echoing Tales in Act II appeared on the most northeastern isle on the map. From Twinning Isle look north and bit to the east and you should see a rock formation on the map. Sail to it and then climb up a bit. You should find a grassy patch on its northern side. Seashell is found on it. It is called Sail and Escape and is Echoing Conch #28 Chapter V. 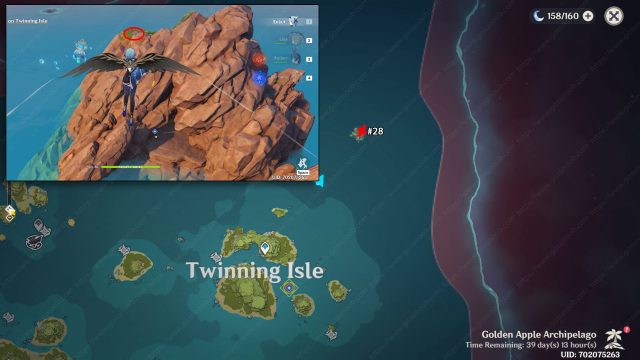 All four Genshin Impact Echoing Tales Chapter VI Familiar Voices Conch locations are scattered across different islands of the archipelago. Echoing Conch #29 Chapter VI is in the northwest of Minacious Isle, on the beach near the large stone arch. Check out the image below to see exactly where it is. 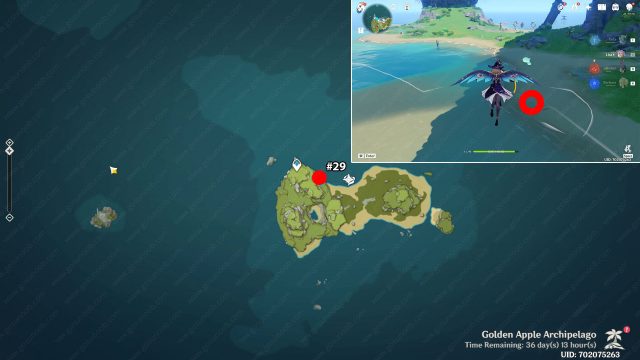 Echoing Conch #30 Chapter VI is on the mid-sized island northeast of Pudding Isle and southeast of Twinning Isle. On the beach in the northeast corner of that island, you’ll find a monster campsite, with four huge, interconnected horns. Beat the monsters up and approach the destroyed boat. The conch will be on a wide, flat rock next to it. 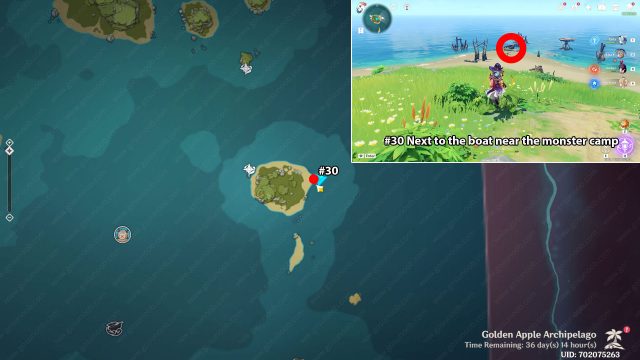 The third Familiar Voices Conch, aka Echoing Conch #31 Chapter VI, is on Pudding Isle. Go to the teleport waypoint, and then glide off the southern cliff. Pay attention to the cliff side, as you have to land on a long, grassy platform about halfway down. That’s where the conch is. 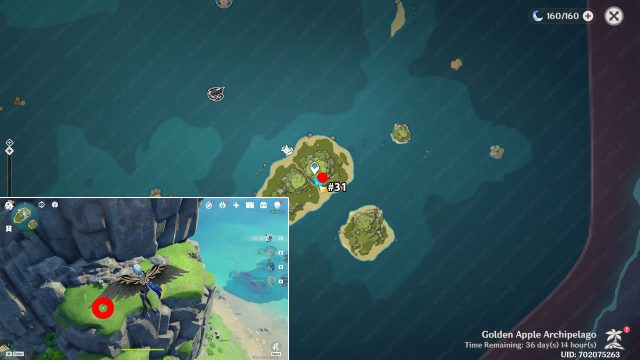 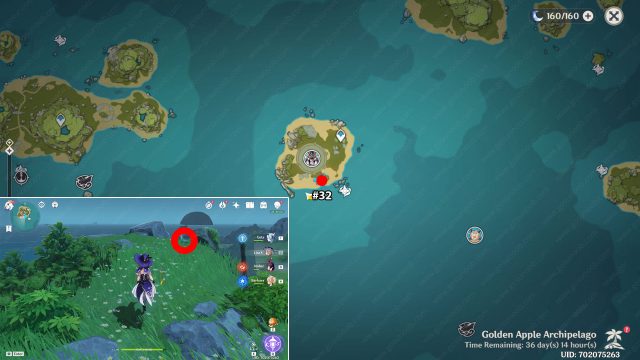 PREVIOUS POSTMinecraft Axolotls Locations – How to tame Axolotl, what do Axolotls eat

NEXT POSTFind And Light Up All The Devices Genshin Impact