The “Hayashi of Tanuki in the Forest” is a part of a new quest in Genshin Impact – Sacred Sakura Cleansing Ritual, which requires you to find three Little Tanuki. This quest starts in Chinju Forest, where you will come across a large statue with a number of hilichurls around it. Defeat them and talk with the statue. The statue will introduce itself as Ioroi and task you with finding three Little Tanuki. Since Tanuki are creatures that can shapeshift and cast illusions, this isn’t an easy thing to do. Luckily for you, our Find The Little Tanuki Genshin Impact guide will tell you precisely where these little tricksters can be found, as well as what you need to do to locate them. 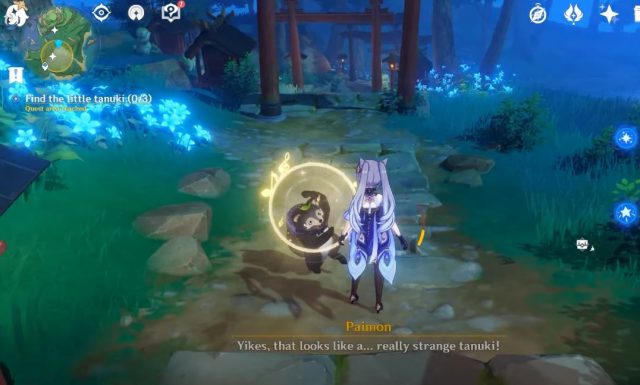 The first Little Tanuki is located at the top of the steps, a short distance from the statue. When you approach it, it will start dancing, then teleport away a couple of times before finally transforming into a torch. You will need to choose a character with Pyro-based attacks and hit the torch once.

The second Little Tanuki is at the top of a tall rock, directly to the right from where you found the first one. There are hilichurls around this rock, so deal with them first. When you’ve done this, climb the rock. Here, you will see a barrel. Attack it to reveal the Tanuki inside of it.

You will be able to see the third and final Little Tanuki a ways southeast from the rock where you discovered the second. Like the first one, when you approach it, it will teleport away several times. Follow it until it – again, the same as the first one – transforms into a torch. Attack it with a Pyro-based attack. You can now return to Ioroi.