The Fort Mumei Puzzle in Genshin Impact is a real head-scratcher, but it’s worth solving it – since doing so gets you the powerful Kitain Cross Spear. This is the culmination of the Orobashi’s Legacy quest chain, so be sure to solve those parts first. It begins by talking to Kaji who is west of Fort Fajitou. Once you’ve talked with him, Fort Mumei will rise from the depths, and you will need to solve its puzzle. Don’t worry, we’ve written this Fort Mumei Puzzle – Kitain Cross Spear Genshin Impact guide to help you do just that. 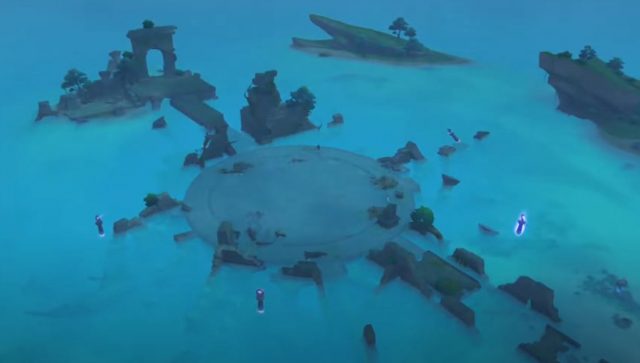 How To Solve The Fort Mumei Puzzle

What you need to do here is to correctly align all the pillars so that its orb will ricochet from pillar to pillar in the right pattern until it reaches the barrier and takes it down. This involves adjusting the elevation and orientation of each one. Since it is often easier to show than to explain through words alone, we’ve linked a step-by-step video down below. Once you’ve set up everything correctly, hit the generator pillar and the barrier will drop. Next, approach the middle of the now-uncovered area, where you will encounter a Maguu Kenki After you have defeated it, it will drop two items: the Rock Pillar Warding Stone and the Rock Pillar Pearl. The Warding Stone is one the ground and the Pearl is at the top of the machine. Once you’ve collected both of them, use them on the ward device.

Return to Kaji to claim your reward – a diagram for crafting the Kitain Cross Spear. This powerful polearm has the Samurai Conduct effect. Here’s how this works: “Increases Elemental Skill DMG by 6%. After Elemental Skill hits an opponent, the character loses 3 Energy but regenerates 3 Energy every 2s for the next 6s. This effect can occur once every 10s. Can be triggered even when the character is not on the field.”

In our Shiny Minccino Pokemon GO, Minccino Spotlight Hour guide, we are going to walk…