Genshin Impact 2.1 is finally here and with it a host of new additions, such as “The Catch” – a brand-new polearm weapon that you can get. Besides sporting a very snazzy look, this polearm is very powerful and will be a great addition to any polearm-wielding character, such as the Raiden Shogun. However, getting your hands on it isn’t all that simple. In fact, it requires you to solve a particular quest beforehand, as well as talk to a specific NPC. To help you get it as soon as possible, we’ve put together this How To Get The Catch Genshin Impact guide with a step-by-step explanation of everything you need to do to receive it. 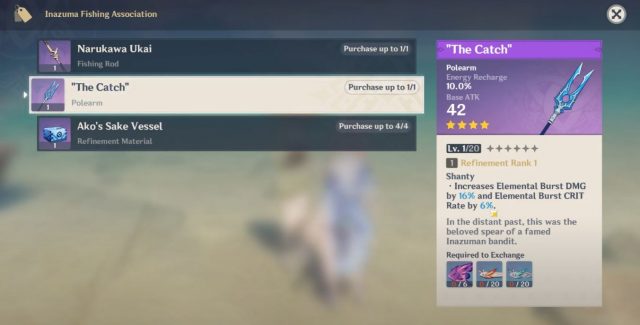 The Catch Location in Genshin Impact

To begin with, you will need to complete the Exploding Population quest. So, go and talk to Katheryne in the Adventurer’s Guild in Mondstadt. She will inform you that there is a problem with the fish population. Follow the quest marker which will lead you to Nantuck. Speak with him. He will introduce to the basics (and wonders) of fishing in Genshin Impact. First, he will ask you to fish at Cider Lake. After that, he will require that you catch an ornamental fish in the Stormbearer Mountains. When you have done all that, return to him in his starting location and show him this fish.

You will now be able to deal with other angler vendors and exchange the fish you caught for items. One of these items that you can acquire this way is The Catch polearm. Go and speak with Kujirai Momiji. You can find this character on the coast to the entrance to Inazuma City. She will be marked on your minimap, so you can’t really miss her. Speak with her and say that you would like to buy some fishing supplies. One of these is The Catch, and you can trade a certain number of fish in exchange for it.

From the tutorial quest you’ll get Fruit Pasta Bait. Once you catch 6 Medaka visit Mondstadt Fishing Association and buy the Fake Fly Bait and False Worm Bait recipe. Use Fake Fly Bait to catch 20 Rusty Koi, 20 Golden Koi, and False Worm Bait to catch 6 Raimei Angelfish. You can find all fishing locations in our guide Fishing Spots Genshin Impact. Don’t forget that some fish can only be catch during night or daytime. And there you have, that’s all there is to How To Get The Catch Genshin Impact.