Talk to Brother Qian at night

Your first task will be to talk to Brother Qian during the night. You’ll find him at the docks in Liyue, but only between 9PM and 5AM. If the time isn’t right, use the clock in the menu to advance it. To do this, you need to open up the menu and click the fourth icon from the top in the sidebar. Select the desired time and wait a bit for it to pass.

Illumiscreen III is more complicated than the first two, because the lanterns are linked. When you rotate one, another one will move with it. It’s a bit fiddly, but we can’t offer much help here – it’s all trial and error.

Once you’re done, three spots will light up – one on the tip of the right wing, one on the left wing, and one at the end of the tail feather. This is where the tree treasures are.

The one on the tip of the right wing is north of Lingju Pass. It’s in the stone tower, at the bottom. There’s a Mitachurl there, but you don’t have to fight it – it’s looking at the wall, and won’t notice you if you just go in and open the chest.

The one on the left wing is north of Liyue Harbor, southeast of the Statue of The Seven. The chest is at the bottom of the cliff, but it’s locked. To unlock it, you’ll need to light four torches. One is in the meadow, one on the cliff, one under the pile of rocks behind the three, and one a bit farther away in a tiny cave. 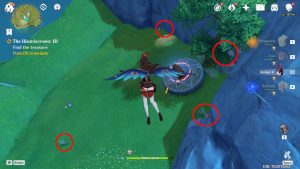 The last one is in Guyun Stone Forest. It’s nested between the rocks on the small island, guarded by two Ruin Guards and a Geovishap Hatchling. You have to dig it up, and if you’re fast enough, you can do it without fighting the three monsters.

Open the chest just opposite of Brother Qian

Once you’ve found all three, go back to Liyue Harbor and talk to Brother Qian. The game will tell you to open a chest – keep in mind that you can open all three.

NEXT POSTGTA Online Peyote Plants are Back in New Weekly Update