Lingju Pass geo pillars puzzle is one of the elemental challenges in Genshin Impact. You’ll notice the pillars as you enter the area – there’s five of them, scattered on islands and in the ruins on the lake. Each of them is protected by a barrier, and you’ll need to perform certain tasks in order to remove those barriers. Once you’ve activated all five pillars, three fancy chests will appear. This guide will show you how to solve Genshin Impact Lingju Pass geo pillars puzzle.

You can’t solve the puzzle if you don’t have Anemo and Geo characters in your party. We did it by using Noelle and switching the Traveler between Anemo and Geo as needed. The first pillar is guarded by a Cryo Abyss mage – defeat him and the shield will go down. The second one requires you to stand on one pressure plate with the Geo Traveler, then drop a big rock on the other.

For the third one, you have to activate the three exploding flower traps. The fourth pillar requires you to use an Anemo character to activate the windmill, then quickly swim over to the pillar. We used the Anemo Traveler and Noelle.

Once you’ve activated the fourth piller, a wind current will appear in the middle of the lake. You can’t use it normally, since it’s above the water. You’ll have to glide into it, and the obelisks jutting out of the water are a good place to do it from. 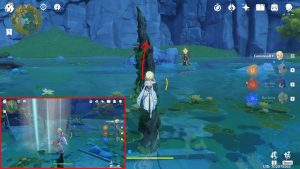 When you land on the floating platform and activate the fifth and final pillar, three chests will appear by the first one, on the stairs – one precious and two exquisite. Make sure to check if any of the loot rolled down the stairs – it’s easy to miss.