The Search For The Missing Part To Repair The Ward is part of the Orobashi’s Legacy Part I in Genshin Impact. This is part of a larger quest chain, at the end of which you will be rewarded with the Kitain Cross Spear. So, doing it is definitely worthwhile. But, it’ has some of the most complicated puzzles in the game. To help you get through it without too losing too much time and without too much frustration, we’ve written this Search For The Missing Part To Repair Ward – Orobashi’s Legacy Part I Genshin Impact guide. 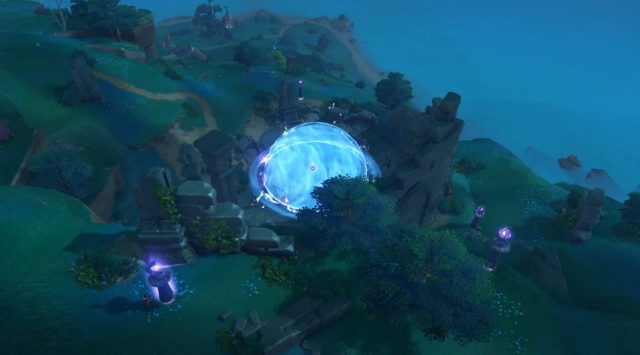 Where Is The Missing Part To Repair The Ward

You will receive the Orobashi’s Legacy Part I quest from Kaji who is near Fort Fujitou. You will need to get the Narukami Pillar up and running again. When you approach and interact with this pillar, you will sense that it is missing something. Use your Elemental Sight to search for the missing part. Luckily, it is nearby, in the hole next to Kaji, protected by a barrier. Go there and first take care of the enemies here. Next, return to where Kaji is. Close to him, you will see the Generator Pillar that you need to align, along with several other pillars. This puzzle requires you to align these pillars so that they the shot you get by attacking the Generator will ricochet from one to another until it takes down this barrier. To do this, follow the steps from the video below.

When you have accomplished this and the barrier is down, head on there. Jump into the hole and glide towards the glowing orb to pick it up. You now have the Musoujin Gorge: Rock Pillar Pearl. Defeat the boss there. After he is down, you will then be able to pick up the Musoujin Gorge: Rock Pillar Warding Stone. With these two items now in your possession, return to the Narukami Pillar. Interact with it and select the Pearl and Warding Stone. All that’s left now is to go back to Kaji to complete this part of the quest.