The Naku Weed is a new type of plant that has been added to Genshin Impact in the latest update. The Naku Weed can only be found on Inazuma. If you still haven’t reached this new area, we recommend you read our How To Get To Inazuma guide for all the details. The Naku Weed is a purple flower that isn’t particularly easy to spot. It’s short, three-leafed purple flower, and in one of the sidequests, you will need to collect 12 of them. In this Naku Weed Locations Genshin Impact guide, we will cover where you can find this plant, as well as what it’s used for. 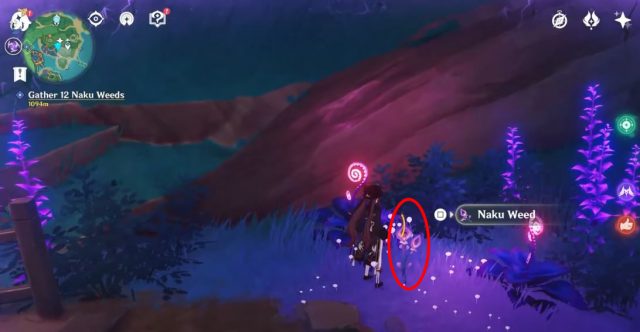 As we mentioned, the Naku Weed can be found exclusively on Inazuma. Unlike some other new resources such as Electroculus, which can be found all over these islands, the Naku Weed is clustered in several places. The largest clusters of them are on Tatarasuna and around the Grand Narukami Shrine. You can see their exact locations on the pictures below.

What Are Naku Weeds Used For

Its description states that: “Even on windless days, this plant will tremble lightly amid the cries of thunder. The part of it that resembles petals are in fact extensions of the leaves meant to protect the fragile flower.” This doesn’t give a lot of info to its use, but it appears that it will be used for character ascensions. No character has this material for their ascension. However, data mining has revealed that upcoming 5-star character Yoimiya will use Naku Weeds for this. Another use for Naku Weeds is in the creation of the Electroculus Resonance Stone. This gadget allows you to search for nearby Electroculi. The crafting blueprint for this item is obtained when you reach a high enough Inazuma Reputation Level. The Naku Weed respawns every two-to-three days (real-time). So, if you want to ascend Yoimiya as quickly as you can, you should start collecting this plant immediately.

Everyone loves trivia. There’s something just so mentally stimulating and satisfying about thinking through a…