Nameless Treasure is a rare item in Genshin Impact. It looks like a gilded box, and if you find one, you’ll probably wonder what to do with it. You can sell it for a lot of money, but only to one specific character. If you’re wondering where to find nameless treasure, or how to sell it, this guide will tell you everything you need to know about Genshin Impact Nameless Treasure.

The first one is in Dunyu Ruins, northwest of Liyue Harbor. It is submerged in the lake, so you’ll first have to make the water level go down. To do this, you’ll have to light four torches in the ruins. One is next to the pillar in the water, one is on the platform next to the Geo Element Node, one on the stone pillar above it, and the last one’s inside, on the lower floor. Once you’ve lit them all, hit the node and the water level will drop.

Now you need to deal with the shield. There are three receptacles around it. You’ll need to find and guide three blue spirits to them in order to lower the shield. All three are nearby, in the area that used to be submerged. Once the shield is down, grab the Nameless Treasure from the chest.

Finding the NAmeless Treasure at Lingju Pass involves completing a side quest called And This Treasure Goes To…, in which you rescue a distressed scholar from a band of outlaws. The quest will guide you to the top of the ruins, where you’ll find the scholar in a cage. You’ll find the key to the cage in the chest next to the cooking pot, after you’ve defeated the treasure hoarders. The scholar will tell you where to find the Nameless Treasure – it’s under the giant golden tree in the middle of the area.

Rex Lapis walks among us, and Liyue is secure. To mark the work of our forebears, he left here five seals, setting them within pavilions.

When you get to Qingxu Pool, go to the middle of the area and interact with the stone tablet on the edge of the cliff. It’ll let you know about the five seals you need to break using the Geo element. Each of them is in one of the surrounding towers. Visit them all, break the seals, and when you come back to the tablet, the chest will be there.

Where to sell Nameless Treasure?

The item’s description says that there might be someone in Liyue Harbor interested in taking a look. That someone is Linlang, the proprietor of Xigu Antiques. It’s the store next to the jewelry vendor, and it’s only open at night. Bring the treasures to him, and he’ll give you 40 primogems, 100000 Mora and a bunch of adventure exp. 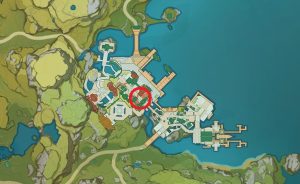 NEXT POSTCrash Bandicoot 4: It’s About Time Review – Can You Really Go Back Home?