Noctilucous Jade is a type of material in Genshin Impact. It’s a rare ore, one which you’ll need for several weapon and character ascensions, as well as some side quests. One of them is the Big Business quest from Bao’er. Since it’s such a rare commodity, and you’ll need quite a handsome pile of it, lots of people are wondering where to find it. That’s why we’ve written this guide, to show you Genshin Impact Noctilucous Jade map locations.

Where to find Noctilucous Jade?

You can find Noctilucous Jade around many caves in the Liyue region. The best place to look for it is Mingyun Village, a mining settlement south of the snowy mountains of Mondstadt. It’s a mineral that glows in the dark – your best bet is to go looking for it at night, as you can spot the blue glow from afar. 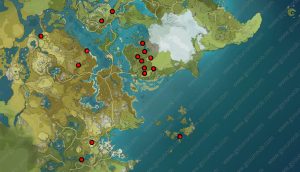 The first time you’ll need it will probably be Big Business, the Bao’er invoice quest – she’ll ask for three lumps of the material in exchange for the invoices. After that, you’re going to need increasingly large quantities of it for Beidou’s ascension. It starts off with just three, but by the time you’re after the sixth ascension, you’ll need a whooping sixty lumps. So it would probably be wise to visit Mingyun Village whenever you’re in the area, so you can stock up on jade before you actually need it.

It makes sense that Beidou would require a material found only in Liyue – after all, that’s where the Crux operates from, and she has quite a reputation in the area. Sadly, it’s not the only material her ascensions require – you’ll also need varying quantities of Vajrada Amethyst, lightning prisms and different kinds of insignia. It’s mora than worth it, though, as she’s a formidable fighter.