The Sango Pearl is a local specialty in Genshin Impact, and it can be found on only one location. Currently, there isn’t really a reason to get this, but it is rumored that it will be the Ascension Material for an upcoming character. As such, it is a good idea to get to farming it as soon as possible. Our Sango Pearl Location – Genshin Impact guide will show you all the places where this pearl can be found, as well as discuss exactly which character is expected to use it as their Ascension Material. 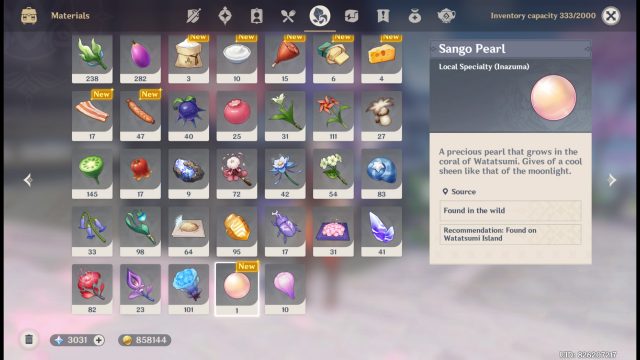 The Sango Pearl is exclusive to Watatsumi Island. To help you find all of them as quickly as possible, we’ve marked the location of each pearl in the screenshot below. They grow near the native coral of Watatsumi, and you will easily be able to spot them thanks to their delicate pink hue. Its description states: “A precious pearl that grows in the coral of Watatsumi. Gives off a cool sheen like that of a moonlight.”

How to Use Sango Pearl – Kokomi Ascension Material?

Now, this is only speculation on our part, but the Sango Pearl will most likely be used as the Ascension Material for Sangonomiya Kokomi. This upcoming 5-star Hydro character is going to become available in the game on September 21st and we will be able to positively verify whether or not that is the case then. Still, odds are good that the Sango Pearl is indeed connected to her. Kokomi’s official titles include “Pearl of Wisdom” and “Divine Priestess of Watatsumi Island“, both of which point to this being true. In any case, if you want to Ascend her quickly, we recommend you get to gathering Sango Pearls.

NEXT POSTHow to Get Frog & Make Stew in Wacky Wizards