The Seirai Stormchasers is a lengthy new questline which was added to Genshin Impact 2.1, and it consists of Parts 1, 2, 3, and 4, all of which deal with you finding ways to seal the warding stone. This is an important quest, since it allows you to turn off the electric storm that surrounds Seirai Island. By removing it, you will be able to explore this island without taking constant Electro damage. In this Seal the Warding Stone Genshin Impact – Seirai Stormchasers Parts 1, 2, 3, 4 guide, we will go over all four parts of this quest and explain what you need to do to solve them. If you prefer to watch instead of reading, we have a video of the entire questline directly below. 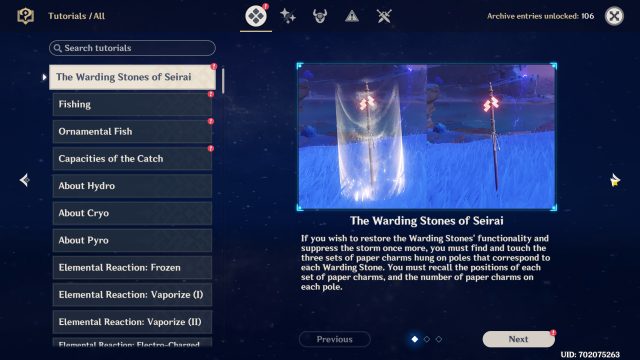 This quest begins by talking to Katheryne at the Adventurers’ Guild in Mondstadt. She will task you with finding two missing adventurers, Miss Eiko and Mr. Taisuke, on Seirai Island. Go there. Follow the quest compass until you reach Eiko. Then, go to investigate the Warding Stone. It is here that you will encounter Taisuke. Next, follow the cat footprints. They will lead you to a shrine and the cat Neko. The cat will ask for your help. The first thing you will need to do for it is to check on the offering box. Since it is in a state of disrepair, you need to gather materials to fix it. Go to Koseki Village. Here, you will need to defeat treasure hoarders.

Once you have done so, go to their camp at Fort Hiraumi. Again, defeat all the treasure hoarders here. Search for the materials around camp and then return to the Asase Shrine to fix the offering box. After that, return to Neko. The cat will teach you how to seal the Warding Stones. Go where Taisuke is. Touch all three paper charm hangars. Finally, approach the Warding Stone itself. Rotate the bottom twice. That does it for this portion.

The second Warding Stone is on the northeastern part of Seirai Island. Follow the quest markers and once you get here, you will have to defeat all opponents. After that, touch three paper charm hangars around the stone. The first two are around the stone, while the last one is on a floating rock a short distance away. Return to the Warding Stone and rotate the top three times.

The third Warding Stone you will need to seal is west of Koseki Village. This is where things get complicated, since you will have to use the Phase Gate to get to all three paper charm hangars. It’s best to watch our video below to see how this is done. Once you have touched all three, make your way to the Warding Stone. Rotate the top three times and rotate the bottom five times.

The final fourth Warding Stone is south of Amakumo Peak. Like the previous section, this one will also have you zapping around in the air. You know the drill – touch three paper charm hangars when you reach the Warding Stone. To seal it, rotate the top twice and then rotate the bottom twice. Congratulations, you have now completed this and can now wander around Seirai Island. We hope that you have found our Seal the Warding Stone Genshin Impact – Seirai Stormchasers Parts 1, 2, 3, 4 guide helpful and informative.

NEXT POSTActivate the Mechanism – Genshin Impact Relics of Seirai