Genshin Impact is famous for a lot of things – its world-building, quests, characters, and, of course, its enemies as well. Every update to the game adds a variety of new foes to battle and defeat, and the latest update, Genshin Impact 3.4, is no different. One of the more powerful enemies in 3.4 is a new world boss, called Setekh Wenut, the Last Prince of the Sands. But, to fight it, you will first need to find it. We have the Setekh Wenut entrance location in Genshin Impact right here, so read on to learn where and how to find and battle it. 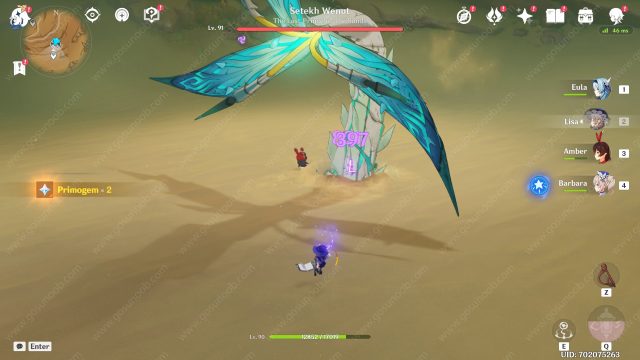 The Setekh Wenut world boss is going to be marked on your map once you zoom in close enough. So start by teleporting to the waypoint directly south from this marker. Once you get there, what you need to do is to move towards the marker. You will soon reach a big hole that you can glide down to. This is the entrance to the Wenut Tunnels where the Setekh Wenut is hiding. If you look down, you will see a big spiraling vortex of green energy and sand. Once you get close enough to it, it will burst out of the ground and the fight against the Setekh Wenut is going to begin.

There are two Hidden Achivements concerning this world boss. The first of these is titled “He Who Controls the Spice” (an obvious reference to Sandworms from Dune). To get it, you will need to damage Setekh Wenut until it summons a pair of Anemo Orbs. You need to destroy these using an elemental attack (any except Anemo or Geo are going to work). The other HA is “I Hate ’em Myself!” Note that you can’t get this HA during the battle with the world boss. No, what you need to do instead is to go into the desert and wait until the Setekh Wenut hits you from under the ground. Just wait for a bit and it is going to appear and attack you.

NEXT POSTWhen is Warzone 2 & DMZ Season 2 Coming Out?