A brand new gadget has just been released in Genshin Impact. This device is the Omni-Ubiquity Net, and it works very similarly to the Pokeballs from the Pokemon franchise. Meaning that, when you use this gadget, you will be able to capture certain animals. You can then place them in your Serenitea Pot, making the entire place feel even nicer and more customizable. Of course, before you are able to use this device, you will first need to acquire it. This can be done by talking with Wakamurasaki. But where is this designer located? In this Genshin Impact Wakamurasaki Location guide, we will show you where she can be found and how you can get the Omni-Ubiquity Net gadget. 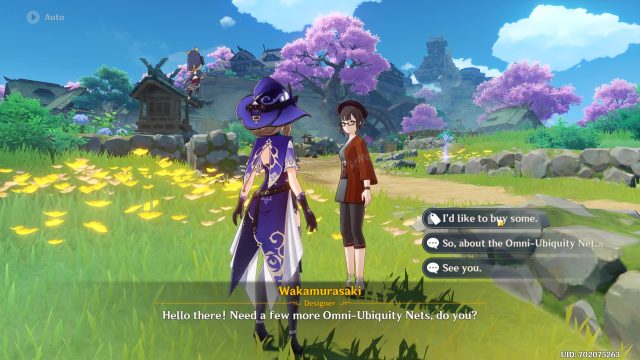 Like we have mentioned in our previous how to get Omni-Ubiquity Net guide, the proper version of this gadget is obtainable once the Bantan Sango Case Files: The Warrior Dog event has been finished. Luckily, this has occurred today, December 20th, so you can now get a new improved version of the Omni-Ubiquity Net from Wakamurasaki. She can be found just a short distance away from Inazuma City. Teleport to the Waypoint in Inazuma City and then go northwest until you reach her. We’ve marked her exact location in the screenshot down below. 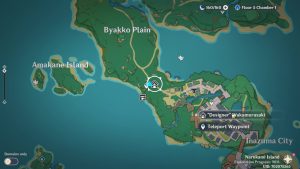 This gadget costs a hefty 10,000 Mora, and, after completing a short World Quest, you will be able to purchase five of these a week. They are equipped from your gadget inventory tab just like any other gadget. Although, since this counts as a consumable, whenever you successfully use one of these to catch a critter, it will then be spent and disappear from your inventory. Which means that you can only capture several animals a week. Still, you should be able to fill up your Serenitea Pot with cute little animals in no time.

NEXT POSTWhere is Krampus in Warzone, How to Defeat Krampus