The Yougou Cleansing is a Genshin Impact quest that gets you some very nice rewards, namely – the Mask of Memories and Hakushin Ring. However, solving this quest isn’t an easy thing to accomplish. To be able to undertake it, you will first need to solve the Strange Story in Konda, Sacrificial Offering, and Cleansing Defilement quest chains. Only then will you be able to receive this quest from Kazari. In this Yougou Cleansing Genshin Impact – Mask of Memories, Hakushin Ring guide, we will tackle this quest and the items you get from it. 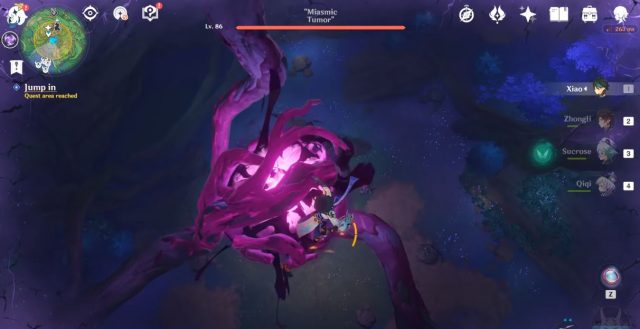 How To Begin The Yougou Cleansing

After receiving this quest, the first thing you will need to do is to find Kazari. She can be found on Mt. Yougou. The quickest way to get to her is to first teleport to the Grand Narukami Shrine. Then, jump from its edge to the northeast and glide until you see the opening to the place where Kazari is waiting for you. Talk with her and she will then take down the barrier, allowing you to jump into the heart of darkness and confront the Miasmic Tumor there.

Glide to the bottom of the purple hole, until you see the Miasmic Tumor. Attack it to begin the Miasma Boss Fight. This is a tough one, so be prepared. At the start of combat, it will summon a ghostly Samurai. Once you have defeated it, you will need to connect the shrines in the same pattern, like you have done in several quests that lead to this one. After that, you will be able to damage the Miasmic Tumor directly for about a third of its health. The Tumor will again summon another Samurai and once it also goes down, another pattern will appear. Repeat the process. Once the Tumor is down to its last third of remaining health, it will summon two Samurai. Defeat them and complete the final pattern and you will be able to defeat it once and for all.

The Mask of Memories and Hakushin Ring

Kazari will appear to congratulate you on defeating the Miasmic Tumor, and then she will depart, leaving behind her Mask Of Memories. This mask acts as a forging blueprint, and when you use it, it will teach you how to craft the Hakushin Ring. It has the potent Sakura Saiguu effect. Here’s how this effect functions: “After the character equipped with this weapon triggers an Electro elemental reaction, nearby party members of an Elemental Type involved in the elemental reaction receive a 10% Elemental DMG Bonus for their element, lasting 6s. Elemental Bonuses gained in this way cannot be stacked.”