Hot springs are places of interest in Ghost of Tsushima. Taking the time to relax in one and gather your thoughts will increase your maximum health. There are eighteen of them in total, and you’ll have to visit them all if you want the Body, Mind and Spirit trophy. Most of them aren’t particularly hard to find, and exploring the entire map will reveal almost all of the locations. However, some hot springs are hidden in hard to reach places and locations you wouldn’t think to search. To help you find them all, we’ve prepared this Ghost of Tsushima hot springs locations guide.

There are nine hot springs locations on the island of Izuhara. Two are in Hiyoshi, two in Ariake and one each in Tsutsu, Azamo, Komatsu, Komoda and Kashine. Here’s where each one of them can be found. 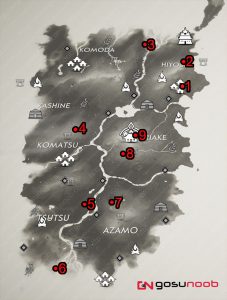 This is the first hot spring you’ll find in the game, and it’s almost impossible to miss. It’s in the inn in the southeastern part of the region, west of the Hidden Springs Forest. Talk to the peasant woman on the cliff above the hot spring, and she’ll explain how they work.

This hot spring is also in the Hiyoshi province, south of the castle, west of the Isonade Coast shrine. Climb to the easternmost peak of the central massif, and you’ll find the spring near the lookout tower. Be sure to take a moment to enjoy the view before you head out.

The next hot spring is in Komoda. Head west from the castle, and as soon as you cross the river and enter the new region, look for a small hill ahead. Climb it and you’ll find the collectible. You won’t see it before you climb, thanks to a big rock that’s obscuring it. 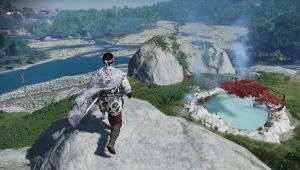 You’ll find this hot spring in the border area between Kashine and Komatsu. It’s at the bottom of the mountain separating the two regions, and you’ll find it nested between cliffs on the eastern slope. It’s a cozy spot, and it’s easy to miss from the road. 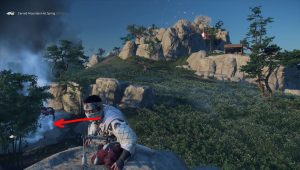 This hot spring can be found in Komatsu. It’s in the south of the area, near the border with Tsutsu. You’ll find it hidden away in a valley in the forest west of the bend in the river, the one where the big shoal is.

This hot spring is in Tsutsu, and it’s the southernmost one. It’s on the coast, a short hike away from the mouth of the river. It’s a nice place to relax, and the seaside air is sure to be therapeutic as well.

This one can be found in Azamo. It’s on the northern slope of the region’s mountain, in the thick forest north of Archer’s Rise, west of Kii’s Pond. The foliage makes it easy to miss, but the characteristic red leaves will help you spot it.

You’ll find this hot spring in Ariake. It’s on the southern slope of the mountain, north of the Winding Trail. You’ll spot it from afar, since it’s stuck in the middle of a meadow with few trees.

The last hot spring is near the village in Ariake, south of the Golden Forest. It’s at the top of a big rock outcrop, which you’ll have to climb in order to reach it. Exit the village through the eastern gate, the one near the bell. Cross the road, and you’ll find a series of ledges and footholds in the cliff face on the other side. Scale the cliff and you’ll find the spring.

There are six hot springs in the Toyotama area, the southern part of the northern island. They’re usually near settlements, and aren’t all that hidden from view, but you still might miss a few here or there. Below are their locations. 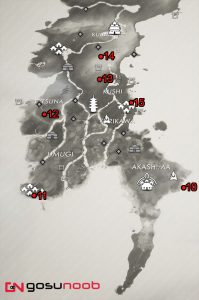 You’ll find the Marsh Tide hot spring in Akashima, the southeastern province. It can be found in the coastal swamp all the way to the east, on the peninsula east from Hakutaku forest. Look for the recognizable red-leafed tree.

The next hot spring is in Umugi. It’s in southern part of the province, southeast of the village. It’s near an ancient tree, close to the coast – if the weather is bad, make sure to use your flute to clear it up, or else you might miss the location.

The Yoshinaka hot spring can be found in Otsuna, west from Mamushi Farmstead, north from Ichi’s Inn. Look for a dilapidated house on a hill. The spring will be nested in the woods behind it.

This one’s hidden away in Kushi. As the name suggests, you’ll find it in a bamboo forest – one that’s south from Old Toyotama Hills, west from the lake. Use the guiding wind to avoid getting lost in the woods.

The Maple Shade hot spring is on the border between Kushi and Kubara. You’ll find it on the slopes covered with yellow and red leaves, west from Fort Koyasan, northwest of Little Monk’s Pond. Use of the guiding wind is advisable here, since the spring’s tree doesn’t look as striking, considering the surroundings.

The last hot spring on this map is in Yarikawa. You’ll find it near the coast, a short walk northeast from the village. It’s in a forest, surrounded by blue flowers.

Kamiagata is the last map you’ll get to explore, the cold northern reaches of the big island. There are only three hot springs there, and the only reason you might miss them is because of how few of them there are. You’ll find their locations marked on the map below. 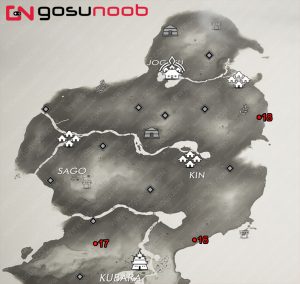 The White Mist hot spring can be found in the southeast of the map. It’s on a snowy plain near the shore, southwest from Kin Village, south from the Endless Forest. The woods in the area have been burned, so you’ll have no trouble spotting it from afar.

This one can be found in the southwest of Kamiagata, on the northern slope of the mountain separating it from Toyotama. It’s in a cozy place called Jito’s Foothills, surrounded by rocks. The rocks will block your view if you’re coming there from the north

The Morimae hot spring can be found in the eastern part of the map. You’ll find it southeast of the village, near the edge of the eastern cliff. Use the wind of health if you have trouble pinpointing the exact location – it’ll lead you straight to it.