Bamboo Strikes in Ghost of Tsushima are special points of interest at which you play a mini-game and increase your Resolve. There’s a total of 16 Bamboo Strikes scattered all across the game, and you have to figure out where to find them all if you want to max out your Resolve and get the Body, Mind and Spirit achievement. The majority of these locations not too difficult to find, so long as you carefully explore the map. That said, there are some of them that are truly off the beaten path, and might escape you. So, in order to help you on your journey, here’s our Ghost of Tsushima Bamboo Strikes locations guide.

There’s a total of seven Bamboo Strikes locations in the Izuhara region of Ghost of Tsushima. Each of the sub-regions of Izuhara has one Bamboo Strike, named after the sub-region: Hiyoshi, Ariake, Azamo, Tsutsu, Komatsu, Kashine and Komoda. However, they aren’t exactly in the center of each region, so it gets a little confusing. So, here’s a map to show you where all seven are. 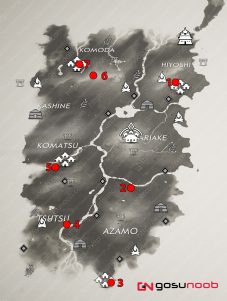 The first bamboo strike mini-game that we’ve come across is in the northeast of Izuhara, in Hiyoshi. In the center of the Hiyoshi area, there’s a town called Hiyoshi Springs. If you circle around to the northwest of the town, you’ll find a house with a white banner and a symbol of cut bamboo on it. There’s also an NPC with a different bamboo symbol above his head. Talk to the NPC to learn a bit more, then proceed to the bamboo-cutting “altar” to start the mini game. Simply complete the button prompts quickly to increase your Resolve.

Bamboo Strike #2 we found in Izuhara is in the south, in Azamo. Specifically, we’re going to the northern border of Azamo, to the area northeast of Kii’s Pond and southwest of Houren’s Pasture. Here, you’ll find a really large house, and next to it, there’s the bamboo banner pointing you to the Ariake Bamboo Strike.

For the third bamboo strike on this island, we’re going all the way to the south of Azamo and the town of Azamo Bay. In the east of the town, there’s a small house with a large, bare courtyard. At the side of the courtyard near the corner of the house is the bamboo-cutting banner and the bamboo-cutting place. The location is called simply Azamo Bamboo Strike. 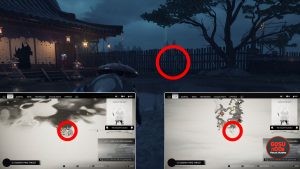 Now, we’re going west, to the bank of the river separating Azamo and Tsutsu. On the Tsutsu side, northwest of the Burn Down Logging Base, you’ll come across an area called Rustling Bend. There’s a huge boulder on the river bank, with the bamboo strike next to it. This is the Tsutsu Bamboo Strike. 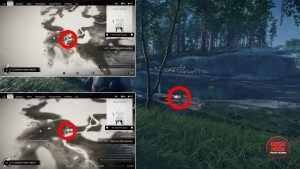 From there, head north to the next large river. Near Brown River Gorge, to the west, you’ll find the town of Komatsu Forge. In the southwest corner of the town, in the corner of the courtyard of what seems to be some kind of palace, is where the Komatsu Bamboo Strike lies. Cut it all down and continue.

Our next target is in the northwest of Izuhara. In the northeast of the Kashine region, you’ll come across a place called Wanderer’s Pass. As you make your way through the pass, look out for the section full of white sheets at the top of a hill. Below the sheets is the Kashine Bamboo Strike. 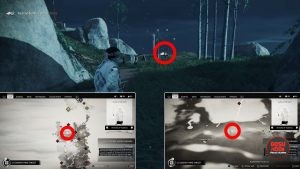 Lastly, we’re going even further to the northwest. East of Wolf Cub Falls and Trader’s Forest, you’ll find Komoda Town. Go inside and explore the town until you find the watchtower. The Komoda Bamboo Strike lies at the base of said watchtower.

In the Toyotama region of Ghost of Tsushima, there are six bamboo strikes for you to complete. The mechanics are completely the same; nothing changes from Izuhara – you just have to complete the button sequences. And, much like in Izuhara, each of the areas of Toyotama have their own bamboo strike – Akashima, Umugi, Yarikawa, Kushi, Kubara and Otsuna. Below, you’ll find a map with all of their locations. 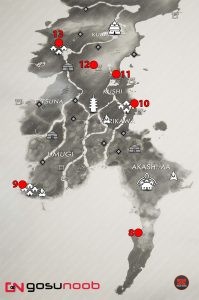 The first Bamboo Strike in Toyotama is in the narrow stretch of land between Izuhara and Toyotama proper. In the north of this stretch, you’ll come across Old Togo Rice Fields. In the northwest of this area, on a cliff overlooking the sea, in a small clearing, is where the Akashima Bamboo Strike is.

The Umugi bamboo strike is on the small, kinda boomerang-shaped island northwest of Umugi Cove. If you go to the tip of the “boomerang,” that’s where you’ll find the strike. It’s next to a campfire and a whole bunch of driftwood; given the surroundings, it’s hard to miss.

Next up, we’re going to Yarikawa Stronghold. That’s a town northeast of Ruins of Old Yarikawa and north of Rebel’s Last Stand. Once in the stronghold, head to the northeast towards the palace-like building on top of the hill. As you approach the entrance, go around the palace to the right. You’ll spot the Yarikawa Bamboo Strike on a small plateau.

Our next destination is the bamboo forest in the north of the Kushi region. Northeast of Benkei’s Falls, you’ll find a tall, rocky hill that you can climb. The Kushi Bamboo Strike awaits you at the top of said hill.

From there, we head to the northwest, to the south of the Kubara region. We’re talking about the area west of Little Monk’s Pond, southeast of Serene Forest, and northwest of Old Toyotama Hills. Once there, you’ll spot a large watchtower on top of a hill. The Kubara Bamboo Strike is right next to said watchtower.

Lastly, we’re going to the northwest corner of Toyotama, to the far north of Otsuna. Northwest of Omi Lake and south of Kubara Forest, you’ll come across Omi Village. North of the village, there’s a walled-off mansion, and the Otsuna Bamboo Strike is in the courtyard, to the right of the entrance.

In Kamiagata, there are three bamboo strikes for you to complete. Again, that’s one per area in the region; except, this time, there are two in one of them. Specifically, you’ll find two in Kin and one in Sago. That’s the only difference, however; the bamboo strikes themselves work the same. So, before we get into the details, here are the locations on the map. 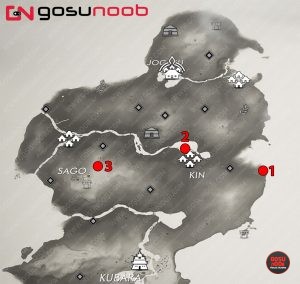 The first Kamiagata Bamboo Strike in Ghost of Tsushima is in the east of the Kin region, at the little horn. Once there, you’ll spot a lighthouse from a distance. Below the lighthouse, there’s a house and a stable. The Endless Forest bamboo strike is in front of said house.

From there, we go west, to central Kin, near the main town of the area. Just to the north of the town, there’s a small, oval island. The Kin Bamboo strike is on the island, near a campfire, in a circle of rocks. It’s pretty easy to spot once you know where it is, because there’s nothing else on that islet, aside from a few bushes.

Lastly, we’re going westward from the previous strike, to eastern Sago. We’re talking about the area east of Sago Forest and north of Bitter Hills. As you ride through the forest, keep an eye out for a small, rocky hill, atop which you’ll come across a watchtower. The Sago Bamboo Strike is on the plateau next to the watchtower.

When you complete all the bamboo strikes in Ghost of Tsushima, aside from a lot of Resolve points, you’ll also get the Sacred Mountain Messenger mask. It’s a piece of Vanity Gear, so it doesn’t give you any particular bonus. It is, however, a mask of an old, wise monkey, and what more could you possibly want from life?