River Children is a side tale in Ghost of Tsushima. There’s a part of the tale where things can go wrong due to a bug, during the objective where you have to investigate the docks. Although it’s only a side quest, not finishing it thanks to a bug can leave a sour taste in your mouth. In the guide below, we’ll describe how to fix investigate the docks bug in River Children Ghost of Tsushima tale.

How to Investigate the Docks

To investigate the docks, and progress with the story, you need to examine a couple of clues. As your character approaches the clue to investigate it, he will just linger there indefinitely. This bug stops you from progressing the story, and no matter how much time passes, the character will be stuck in this position, and you can’t do anything about it from there. 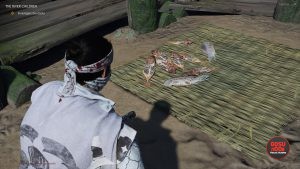 It doesn’t matter which one of the clues you choose to investigate, weather it is the half-eaten fish or the tracks near the end of the dock. The game just kind of bugs out, even though everything else works. The weather changes, you can hear noises, and the wind still plays with your clothes.

To complete the River Children, and pass the bugged investigate the docks objective, you need to load the game again. This can be done by exiting to the title screen, or turning off the game, then loading it up again. This will fix the bug and allow you to complete the broken objective. Although it might be your first choice, since you can only open the map when the bug occurs, using fast travel and then heading back to the objective won’t work.

If you’ve fixed the problem, you can do the next objective – investigate the riverbank. This path takes you to the other side of the river. Spot the tracks on the ground and track the kappa, following the coast away from the docks. After the next clue, you’ll get to investigate the riverbank in order to track the kappa to the nearby forest. This is where the bandits responsible for the events happen to reside. When you’ve dealt with them and picked up the flute, return and speak with Shino to complete this quest. A rather sad story, but most of them are, here in war-torn Tsushima.

PREVIOUS POSTGhost of Tsushima Respec – Can You Change Technique Points