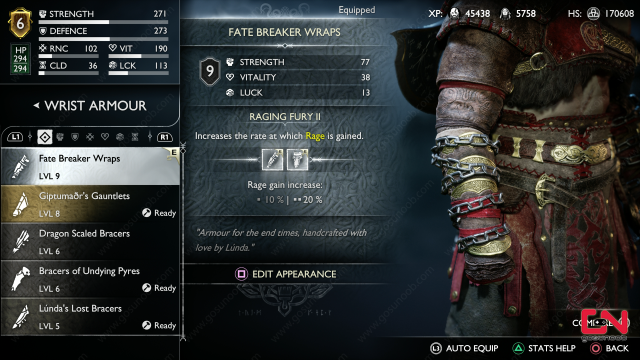 How does transmog work in God of War Ragnarok?

The so-called transmog system has been around in RPG games for more than a decade. Popularized by World of Warcraft, it allows players to change to look of a specific armour piece or the whole set, but without losing the stats the armour provides. For example, if you love how your character looks in armour set A, but armour set B provides better stats, you can wear the B set for those stats, but simultaneously change your appearance to match the A set. With that said, let’s see how to change the armour look in God of War Ragnarok.

While developers confirmed the God of War Ragnarok transmog system, they didn’t reveal how it will work. Because of this, many players don’t know where to find this option. It’s quite simple – you can only change the appearance of those armour pieces which you previously upgraded to Level 9. Only then the “edit appearance” option will appear, and only for that Level 9 item. And you will be able to change the look of that particular piece of armour. You can change it so that it looks like any of the other armour pieces you own in that category.

You can upgrade your armour pieces by visiting Huldra Brothers’ shop, selecting the item that you want to upgrade, and holding the Square button to upgrade. Of course, Sindri and Brok will require some Hacksilver and Forged Iron each time for the service. So there you have it, that’s how you unlock transmog in God of War Ragnarok. That said, our “How to Change the Appearance in God of War Ragnarok” guide is completed.