Is your Risen Snow preorder bonus armour missing? Don’t know where to find your God of War Ragnarok bonus content? Don’t worry, we’ve got you covered! The long-awaited sequel to God of War is finally here! Of course, many of you have pre-ordered the game, as you want that sweet bonus and to preload the game to play it as soon as possible. However, many of you are not sure where to find Kratos’ Risen Snow Armor and Atreus’ Risen Snow Tunic. In our guide, we explain how to unlock all preorder bonuses in God of War Ragnarok. 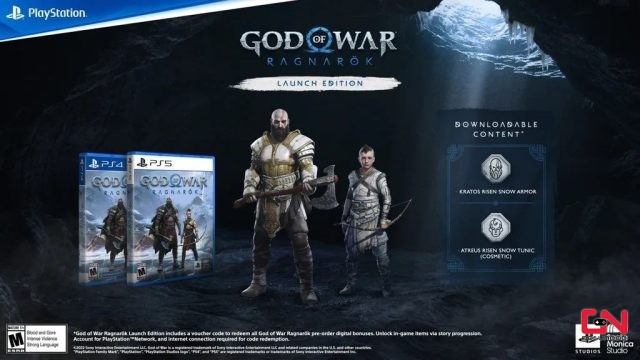 So, how to redeem preorder bonus DLC in God of War Ragnarok? First thing first, you will need to redeem a code for the preorder bonuses. You should have received this code via an email address linked to your PSN account. However, if you’ve purchased the game physically you might have received your preorder bonus code via some other email. Make sure to check them both if you haven’t already activated the code to unlock the Risen Snow armor for Kratos and Risen Snow tunic for Atreus.

That said, the process is still not over. Namely, when you start the game you will probably notice that your God of War Ragnarok preorder bonus content DLC is still not there. That’s because you’ll first need to do some in-game action, and not many players will be aware of that. To unlock the GoW Ragnarok pre-order bonus Risen Snow armour, you’ll first need to complete the first mission and reach the Huldra brothers’ house. Sindri and Brok will be your smiths throughout the game, just like in God of War 2018. Once there, simply check your inventory, and you’ll find the Risen Snow set!