Fans of the highly popular franchise GTA V are excited with the release of the PC version of the game announced for January, 2015. So excited that they rushed to download the so-called “GTA V Beta”, which was recently available on some unofficial sites.
▼Article Continues Below▼
Based on a false report of a leaked PC beta game version, people downloaded the 18 GB content, which was filled with viruses and malware.

Be aware of numerous fake websites that offer GTA V Beta for download. In February, Take-Two Interactive won a dispute over the domain getgtavbeta.com, which was followed by a win over betagtav.com, a fake website that claimed to have beta keys for the game. Do not trust any of these websites. 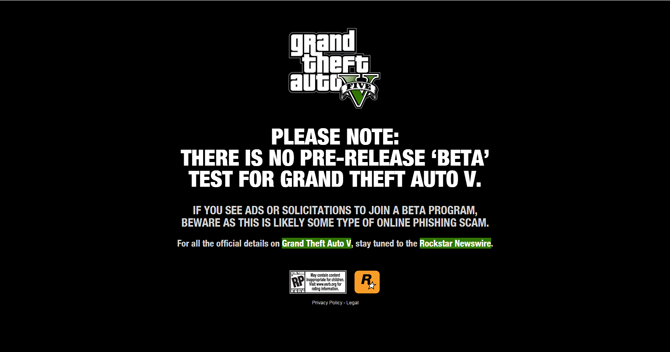 Rockstar Games was made aware of the fake download scam, and the team has issued an official statement on their webpage.

There is no pre-release ‘BETA’ test for Grand Theft Auto 5. If you see ads or solicitations to join a beta program, beware as this is likely some type of online phishing scam,” the message read.