Hand in hand with the previously mentioned Heists, the March 10th update will bring new PvP modes and Freemode activities to GTA Online. Three new Adversary Modes await, and will unlock as players progress through Heists. 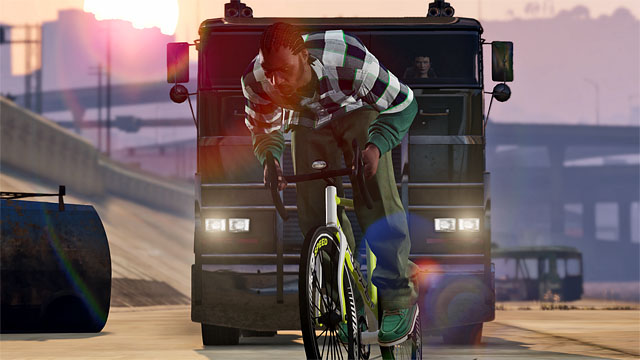 Come Out To Play pits three Runners against a team of Hunters – the former need to reach a certain point on the map, while the latter are out for blood. Runners will have access to all of their weapons, but will be limited to traveling on foot and having only one life. The Hunters, on the other hand, will be glued to their ATVs or motorcycles, while wielding a free aim shotgun and having unlimited lives.

Siege Mentality puts up to four players in the shoes of a team trying to defend a location using all their weapons from up to six attackers with nothing but sawn-off shotguns and unlimited lives.

Rockstar is also adding Daily Objectives – three new challenges that will change every single day. New Freemode activities include Lester asking you to stage diversions, Lamar needing help with smashing vehicles and Trevor and Ron shooting planes down from the sky.

The update is expected to land on March 10th, while the PC version of GTA V should be released on April 14th, along with GTA Online and all its splendor.