The Fleeca Job is the first Heist you’ll encounter in GTA Online. It is a small, two-man bank heist intended to ease players into the new mission type. When playing it for the first time, the leader won’t have to pay the set-up costs. Every subsequent playthrough will require the leader to pay 10% of the reward upfront in set-up costs.

The leader is the one who decides how big of a cut every crew member gets. The rewards scale with the difficulty level, and are as follows:
On top of that, you’ll also unlock a Karin Kuruma ($95,000) and an Armored Kuruma ($525,000) for purchase on the Southern San Andreas Super Autos website. 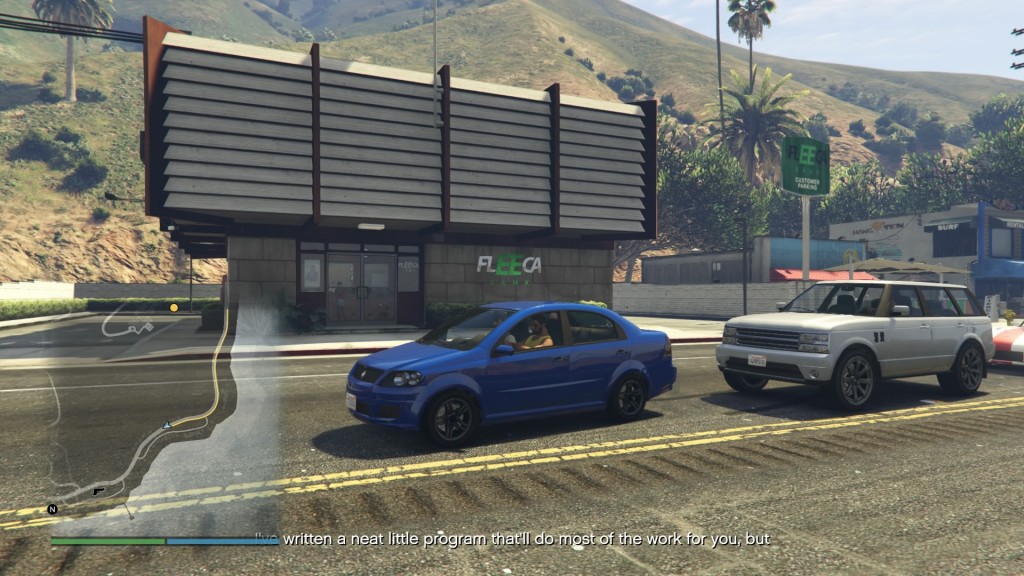 You’ll enter the car with Lester and go to the bank. While one player drives, the other one will be using a phone app to practice opening the vault. Note: The player behind the wheel should take on the role of the driver in the finale, while the passenger, the one playing the mini-game, should be the driller. During the ride, Lester will give you all the details. After that, you’ll go to his factory and pick up his assistant, Paige. Finally, you’ll need to take the Granger SUV to your apartment.

Check out the video of the whole Flleca Job Heist bellow:

Lester will send you to a parking lot in the Del Perro area, where you’ll find a Korean gang hanging out on the top floor. You need to take them out and steal their Armored Kuruma. Don’t forget to put on your masks by pressing the left button on the D-Pad. Drive to Lester’s factory, while the passenger shoots at the pursuers. Watch the road, though, as the payout will depend on the condition of the car.

Pick up the Armored Kuruma from Lester’s factory. While the driver drives, the driller will be hacking the vault door using the phone app. When you’re in front of the bank, put on your masks. Once you’re inside, the driver will have to destroy the four cameras, then start watching the hostages, intimidating them so they don’t start any trouble.

In the meantime, the driller will run to the back, into the vault, and start drilling the safe deposit box. There’s a mini-game you need to beat here, in which you have to break four cylinders with your drill. If it starts to overheat, pull it out using the left analog stick and wait a bit.

Once you’ve got the contents of the box, get into the car and drive towards Zancudo Bridge. A chopper with a giant magnet will pick you up there – you just need to drive steadily under it.

If you manage to achieve the following, you’ll get an extra $50,000 after the finale: