The GTA Online Christmas 2022 event has just kicked off. The Winter update brought quite a few surprises into the game, from the new Snowman collectable to the new WM 29 Pistol, The Gooch, and much more. In this guide, we explain how to start the Weazel Plaza Shootout event in GTA Online Festive Surprise 2022. 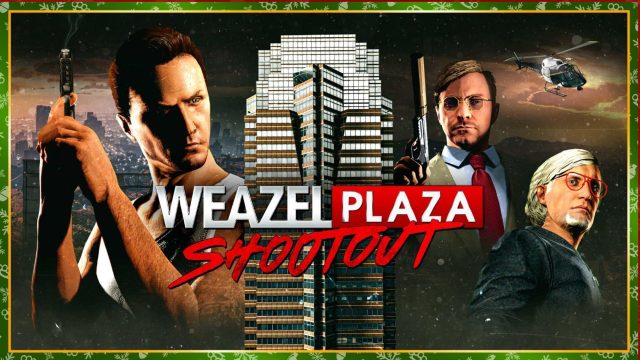 How To Start The Weazel Plaza Shootout Event In GTA Online

Older GTA fans know that there’s only one perfect Christmas movie – Die Hard! The iconic action movie starring legendary Bruce Willis has been synonymous with Holiday entertainment since the 80s. And the new Weazel Plaza Shootout event is heavily inspired by it. The event was added as part of the Christmas 2022 update in GTA Online. The story follows the narrative of the first Die Hard movie closely.

“The Weazel News holiday party has reportedly gone off the rails this year,” says the official description. “Keep an eye on the sky above Weazel Plaza for robbers in a tense shootout with an LSPD helicopter. Get involved, strip the thieves of their wallet and pick up a brand-new weapon befitting of your vigilante heroics.”

You’ll earn some nice holiday rewards by completing this event. You will unlock the WM 29 Pistol and a Season’s Greetings skin. Of course, you’ll also have fun while doing so. Thus, without further ado, here’s how to start the Weazel Plaza Shootout event In GTA Online.

And that’s it; you’ve completed the event! The iconic WM 29 pistol is a reference to John McClane, the main protagonist of Die Hard movies, who uses the same gun in the first movie. If this is your first time completing the event, you’ll also be rewarded with the Season’s Greetings skin and $25,000! Have fun during the Holidays!