If you receive the “Connection To Server Timed Out Code Leaf” error message in Apex Legends, you should know that you are not alone. Since the Spellbound Collection Event update, numerous players are reporting the same issue plaguing their experience in Apex Legends. Apparently, Apex Legends crashes on match exit with this error much more frequently now. Why is this happening, and can it be fixed? Read on to find out. 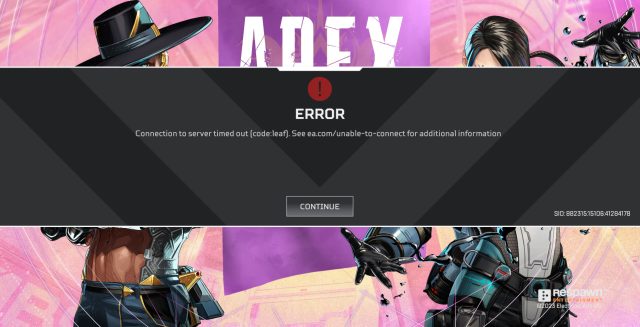 Let’s not beat around the bush and cut straight to the chase. Unfortunately, there’s not much you can currently do to fix the “Connection To Server Timed Out” issue. The issue started appearing soon after the launch of the Spellbound Collection Event update. As reported by players, it mostly appears when they try to leave a match after they or their squad die.

Apparently, Apex Legends now crashes on match exit much more often compared to the state of the game before the update. As we already stated, the good news is that this has nothing to do with your PC, console, or internet connection. The bad news is that there’s nothing you can do about it. However, the developers at Respawn are well aware of the issue and are working on fixing it as soon as possible:

We're aware some players are having issues connecting to the @PlayApex servers right now when in/returning to the lobby. We're working on a fix and will reply to this tweet with updates as we have them. Thanks for your patience while we sort this out.

Hopefully, the bug will be resolved soon. For now, if you are experiencing connections and server issues in the lobby, we advise you to be patient. Oftentimes the issue will resolve after some time. If not, simply restart the game, and you can play again. Many players speculate that the introduction of the “Private Matches” feature has put a strain on the Apex servers, causing players to receive the “Connection To Server Timed Out” when they exit an Apex match. With that said, our “Apex Legends Connection To Server Timed Out Code Leaf” guide is completed. We will make sure to update the article once we have more information.