Besides the usual starting selections of name, class, and physical appearance, one of the things you will need to decide in Salt and Sacrifice when creating a character is – your crime. This can be one of twelve different crimes: Alchemy, Arson, Blasphemy, Brigandry, Drunkenness, Forgery, Heresy, Lasciviousness, Smuggling, Sumptuousness, Usury, and Vagrancy. Each Crime gives you a different starting item. Think of these as Keepsakes from Elden Ring. But which is the best starting Crime to pick in Salt and Sacrifice? We’re here to answer that very question. 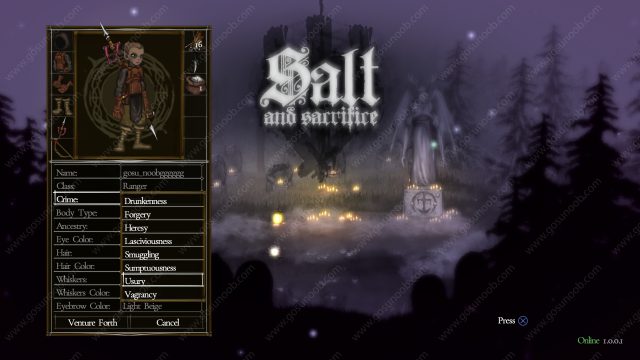 First, let’s see the complete list of all the Crimes and the items they provide:

Now, as for which Crime to choose, it depends on a couple of factors. The first of these is the role-playing aspect. So, for example, if you plan on playing a straightforward fighter, you can pick Brigandry to finely compliment that choice. Since it doesn’t appear that there is any significant change to the narrative of the game based on the Crime chosen, this role-playing is mostly down to how you, the player, want to imagine about your playable character’s backstory. The second important consideration is, of course, the benefit this item provides on a gameplay level. Some of the items here, such as the Fire Bombs (explosive ranged devices), Cutthroat’s Dagger (increases your maximum Stamina), and Bag of Silver (gives 1,000 Silver when used) provide worthwhile bonuses that you can use right from the start.

However, while the game has only been out for a short while and though we haven’t played through it with each one of the 12 starting items, we can still make a couple of educated guesses. Since Salt and Sacrifice (as well as Salt and Sanctuary before it) strives to emulate the style of Dark Souls games, the starting items that pay off the most down the line are the ones that have the “Key Item” descriptor. Key items are important items that are used in quests and to advance the story and open up new areas. Starting items that are flagged as Key Items include: Wooden Doll, Signal Lantern, Lock of Hair, Krine Tablet, and Forged Deed. We recommend that you choose one of these for your starting Crime.

And what are your favorite starting items? Feel free to tell us about your picks and why you have chosen them in the comments below.

NEXT POSTMerge Mansion Paint Can, How to Get