Bloxburg Christmas Update 2022 is finally here with new vehicles, Christmas food, snowy trees, new Christmas themed decorations, gift wrapping and Bloxburg Elf Hunt! Bloxburg is now covered in snow and that means Bloxburg Christmas Elf hunt 2022 is back again! The event is the same, you should help Santa finding his lost Elf. This is the most anticipating event of the entire year, thus, if you don’t know where is the twelfth Elf in Bloxburg 2022, we have you covered. 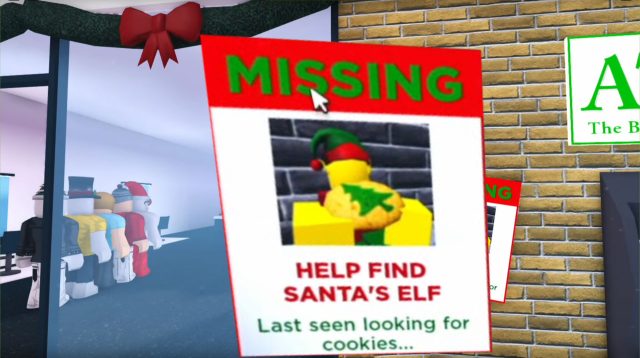 The twelfth Elf in Bloxburg will show up at 5PM EST / 11PM CET. If you give him a cookie during the first 3 hours from the spawn time you’ll get 2,500 money, after that the amount is much smaller.

In the city, look for the BFF Supermarket. Once inside, turn left, and go all the way to the back of the store, where you’ll find a little room full of boxes. The Elf is hidden in the right corner, behind the boxes.

Head to the pier wheel and jump into the ocean. Just swim straight and point your camera under the water. The elf is far away from the pier.

The elf is under the water this time, and he’ll take normal chocolate chip cookie. Once you cross the bridge, turn left and drive along the river. On the screenshots below you can see the exact location where you’ll find the elf under the water.

From the Pizza Planet go down the road. On the first fork turn right. The elf is in the second corner of the edge.

He is hidden inside the highway tunnel near the gas station. It’s very dark, but the moment you enter the tunnel he’s on the left side. You have to go inside the tunnel.

The elf is hidden inside the Bloxy Burgers. Once you enter the building, turn right and you’ll see him in the corner under the desk.

The Elf is near the campfire. If you don’t know where the camp is, just drive your car toward the tunnel, but turn right before entering the tunnel. Go up the hill, then turn right again. Once you drive by the road sign, turn left and drive until you reach the end of the road. You will find a small car parking. You’ll see a campfire in front of you.

Just like yesterday, drive over the river towards the tunnel. Once you reach the Observatory, go behind the tower. You’ll see a small terrace with several benches. Go toward the trees, and you’ll see the Elf in the corner next to the cliff.

UPDATE: Bloxburg First Elf Location December 9th, 2022 is at the entrance of the tunnel near observatory. Don’t forget to take Christmas cookie! Get in the car and drive over the river toward the observatory. The elf is hidden in the corner next to the tunnel entrance. Once you give him the cookie you’ll get 2500 money.

The latest Bloxburg Christmas Update is finally live. New event Elf hunt will last during the whole December, until Christmas Eve. In order to participate you should collect some desert and give it to the lost elf. Every day the elf spawns randomly between 5PM – 9PM EST.

You can find out more about this event once you reach the town center, and look for Stylez hair studio. You’ll see a poster with the missing Santa’s Elf right next to the ATM – the Bank of Robloxia. The only information you can find on the poster is that the Elf was last seen looking for cookies. That’s not a great hint, you have to admit. But, if you did the last year Elf hunt we think that the first Elf will be near observatory, or at the entrance of the tunnel..

We have to remind you that the elf doesn’t spawn as soon as the update comes out, He’ll spawn at a certain time everyday in a random place. Our prediction is that the first Elf will be added tonight, and we’ll try to share with you his location as soon as we spot him. At the time of writing, we still haven’t find any Elf in the game. If you come across the Elf, please leave a comment below and help us find him.