One of the Week 10 Challenges in Brawlhalla requires that you win six matches playing as Legends who trained with Lin Fei. Now, this by itself isn’t hard to do, but players are confused as to which Legends this refers to. And it’s no surprise, since only those very well versed in the intricacies of Brawlhalla lore will be able to figure this out. To save you the time you otherwise would have wasted hunting down this info on various wiki sites and reading paragraph after paragraph of dry backstory and exposition, our Brawlhalla Legends Who Trained With Lin Fei guide will straight up tell you which Legends you can use to complete this challenge. 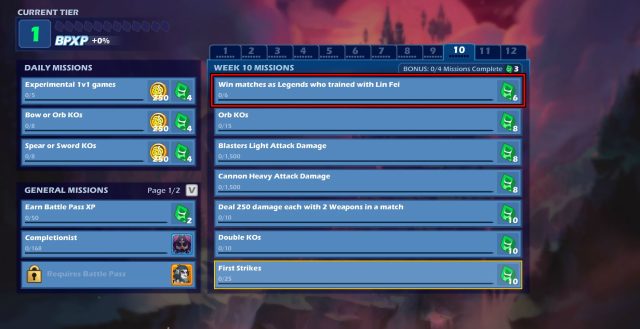 Win Matches as Legends Who Trained With Lin Fei Brawlhalla

As a highly mobile and skilled martial artist, Lin Fei is famed for her speed and dexterity. In her own words, describing her unique martial style: “My own fighting style I named ‘Way of the Iron Dragon.’ It failed to gain much popularity with my students – probably because the pre-requisites are a full-size cannon, an ancestral dragon-spirit, and the strength of ten men.” This has made her a very popular training figure, and she has imparted her extensive fighting knowledge to several other Legends. These include the following:

And there you have it, there are the Brawlhalla Legends Who Trained With Lin Fei. If you play with any of these Legends, you will be able to complete this particular challenge in no time.