Decrypt floppy disk task in COD Cold War is part of the side quest Operation Chaos. During this mission you should look for CIA agent Robert Aldrich and find pieces of evidence that will help you solve a puzzle and decrypt a floppy disc. The puzzle is rather hard and includes some math problems. We hope this cod cold war decrypt floppy disk guide will help you find a solution.

Before you want decrypt a floppy disk, you have to collect three pieces of evidence:

When you investigate the front page of the Observer evidence some letters will be highlighted in red. Wright them down. It’s an anagram that you should rearrange and get a location name in Numbers Station Broadcast evidence. For example, my scrambled highlighted word was SBOTNO and it can be rearranged into BOSTON. Once you find the name of the city, write down the numbers next to it. This number is the code that the computer will ask from you. Don’t forget that red letters are random for each player and you should solve this anagram on your own.

Another part of the riddle is A Coded message, where some red and blue numbers will appear and two question marks between them. Your goal is to find a pattern for red numbers, and a different pattern for blue numbers. Once you figure out the pattern you can fill in the question mark spots with correct answers. Every player will get different numbers and pattern to solve. In my case for red numbers the solution was to add number 5 every time. So my red question mark solution was number 14. 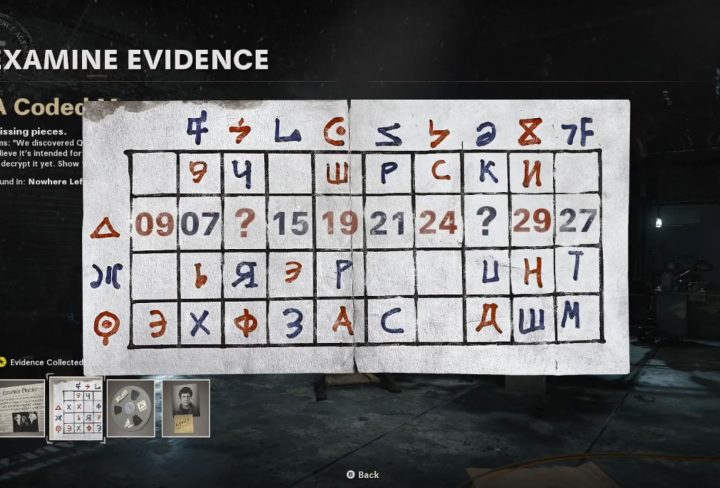 It was a little trickier to solve blue number pattern. My blue numbers were 7, 15, 21, ?, 27. As you can see, you get the second number by adding 8 to the first one. You get the third number by adding 6 to the second one. My reasoning is that to get the fourth number I have to add 4 to the third number. This all fit in nicely because adding 2 to the fourth number results in 27, which is the correct 5th number. This means that the solution to my particular blue number puzzle was 25. This makes the number solutions to the puzzle I got as 14 and 25.

Once you solve the puzzle and find the missing numbers, put them together to create a four-digit sequence. Once again look at Numbers Station Broadcast evidence and find the corresponding city to your numbers. This is the passphrase you must enter when the computer asks you for it.

Important thing to know is that everyone gets a different puzzle, but they usually follow the same math problem pattern. Red numbers usually require you to add a certain number to the previous one to get the whole sequence. Blue number puzzle can be different. You must add or subtract a number, then add/subtract a smaller number for the next number in the sequence and so on. In my case
7 + 8 = 15
15 + 6 = 21
21 + 4 = 25
25 + 2 = 27

As you can see the difference between each number descends by two. In the case of your own puzzle the game will show you the difference can be by one or three and it can be descending or ascending. The main point is that you should be looking for a math pattern to get the solution to the puzzle. Also, remember that red numbers and blue numbers always have a different math pattern as a key to the puzzle.